Three men ticketed for throwing Leafs jerseys on the ice at last night's game have been banned from all MLSE properties for one year, Toronto police say.

After losing four straight on the road, the Leafs added to that streak with a 4-1 loss to the Carolina Hurricanes on Monday night and fans were quick to express their frustration with the team’s performance.

On three occasions, Leafs jerseys were thrown on to the ice during the game and three men were reportedly thrown out of the ACC.

Toronto police say the three men "trespassed" and were given tickets for engaging in a prohibited activity.

"I don't how that happens, what security or the ushers are doing. It seems like we're giving the guy an extra couple minutes to flip everybody off and to mock our real fans,” Kadri said.

“I don't know how that guy's not taken by his shirt and dragged out of there, but what do I know?"

MLSE spokesperson Jamie Deans confirmed to CP24 that charges had been laid but said MLSE had no further comment on the incident.

If they really wanted to punish those Maple Leafs jersey tossers, they’d force them to show up and watch every game left this season.

Funny how #leafs players complain about the jersey toss. If youre embarrassed, do something about it. Now you know how we feel! #pathetic

#Maple Leafs jersey tossers to be charged by police - how about charging the Leafs with not icing a real NHL team?

@SNJeffBlair I have wasted 40 years on the leafs I sure wouldn't waste the money on a jersey to throw on the ice. 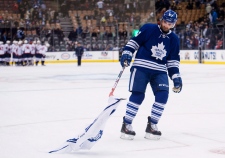