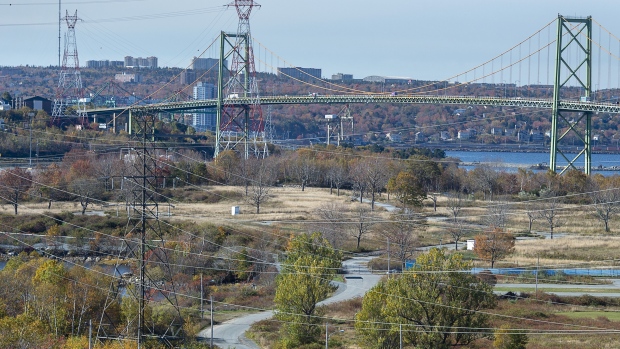 Shannon Park, a former military housing complex in Dartmouth, N.S., and the expected site of a proposed stadium to house a Canadian Football League team, remains a fenced-in park on Tuesday, Oct. 22, 2019. The fate of a private group's bid to bring CFL football to Halifax could be decided today by regional council. THE CANADIAN PRESS/Andrew Vaughan

HALIFAX - The fate of a private group's bid to bring CFL football to Halifax could be decided today by regional council.

Council will consider a staff report on a proposal by Schooner Sports and Entertainment (SSE) to build a $110-million, 24,000-seat stadium at a site in Shannon Park.

The facility would be constructed on land near the city's MacKay bridge that was formerly used for military housing.

The staff report rejects the Shannon Park site, but recommends moving ahead with a one-time payment of $20-million for a facility elsewhere in the city.

The document says the proposed site is severely encumbered by a CN rail line and poor transportation access, meaning the municipality would likely need to invest in a new ferry terminal nearby and three new ferries, adding tens of millions of dollars in costs.

Council will consider options that include amending staff's proposal, directing staff to further study the Shannon Park site, or turning down the staff recommendation and declining the request to support the stadium project.