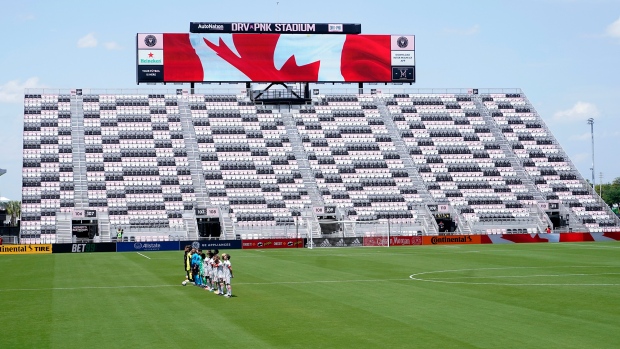 CF Montreal and Toronto FC players stand for the national anthem in a nearly empty DRV PNK Stadium during the first half of an MLS soccer match, Saturday, April 17, 2021, in Fort Lauderdale, Fla. CF Montreal is playing the first part of their season in Inter Miami's stadium due to the coronavirus pandemic. (AP Photo/Lynne Sladky)

But he was looking forward not back. Morrow's family was en route to Orlando, Fla., where the MLS team has set up shop this season due to pandemic-related travel restrictions.

“I'm really happy,” the 33-year-old father of two said recently. “They weren't planning to come down originally and then as things changed in Toronto, we decided it makes most sense for them to just be down here. And I can be around to help them out a little bit.

“I know things aren't going so well right now with COVID in Ontario so my well-wishes to everyone back up there. I hope everyone's staying safe and getting through this time.”

Captain Michael Bradley has also been reunited with his wife and two kids.

“Had schools stayed open and had things been relatively normal there (in Toronto), the idea for my wife and kids was to be around there and to let the kids enjoy being in school every day, be with their fiends, activities.

“But obviously with the way things have played out over the last few weeks, we wanted to just use the opportunity to be together as a family again.”

Earlier in the pandemic, Florida was the hot-spot. Now Ontario is reeling.

Rising numbers, dire predictions and increased restrictions have ratcheted up COVID-19 anxiety north of the border.

There were 6,341 new cases of the coronavirus Friday in Florida.

Ontario reported 4,812 new cases, breaking a record for the most daily infections for a second day in a row.

And the Sunshine State has had far more total COVID cases - 2.16 million compared to 412,745 in Ontario.

TFC has worked hard to accommodate the families of players and staff in Florida, in a bid to make life as normal as possible in an abnormal time.

“We're all really excited to have them around because we don't really know when we're going to be able to get back to Toronto,” said Morrow.

“It's going to be a really good thing - a really positive emotional boost for the group to have our families around. And the club has done a fantastic job to set our location up the way they have - and all the services that are here for us.”

The Orlando resort where the team is staying has a separate property where they are based.

But many of those with families are staying some 15 minutes away in off-property townhouses the club helped secure. Some are staying in single-family homes.

“We want everyone to stay safe,” Curtis, a father of two, said in a text. “There are medical protocols and guidelines for players, staff and families.”

Players and staff expect to get their second dose of vaccine around April 30.

The NBA Raptors are based out of Tampa while baseball's Blue Jays are playing games out of their spring-training base in nearby Dunedin.

CF Montreal, meanwhile, is based out of Fort Lauderdale.