Federal government directs $2 million to women and girls in sport 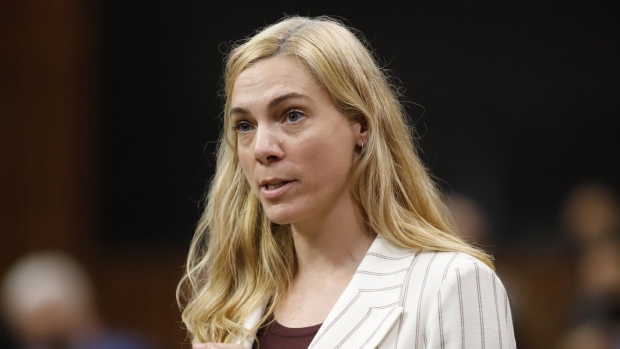 Minister of Sport Pascale St-Onge rises during Question Period in the House of Commons on Parliament Hill in Ottawa on Monday, June 20, 2022. The federal government is giving $2 million to Canadian Women and Sport in an effort to reduce barriers and retain women and girls in sport over the next two years. THE CANADIAN PRESS/ Patrick Doyle

The federal government is giving $2 million to Canadian Women and Sport in an effort to reduce barriers and retain women and girls in sport over the next two years.

Canadian Women and Sport published a study in 2016 that found 41 per cent of the country's girls between three and 17 don't play sports.

Non-participation jumped to 84 per cent in adult women.

The COVID-19 pandemic magnified barriers and inertia, according to the results of another study published last year by the same organization.

One in four Canadian girls who played sports at least once a week before the pandemic weren't committed to returning, which is approximately 350,000 girls, CWS said.

"Although most girls participate in sport in their early years, adolescent girls tend to drop out of sport and physical activity at a much higher rate than boys."

The CWS's $2 million from the feds for 2022-23 comes from a Community Sport for All program designed to reduce sport barriers for women and nonbinary people from Black, Indigenous, racialized, LGBTQ, disabled and newcomer populations.

"We believe that inclusive sport is a powerful vehicle for advancing women's rights and opportunities in Canadian society," said CWS chief executive officer Allison Sandemeyer-Graves in the statement.

"This investment will specifically benefit those who have historically faced the greatest barriers to accessing quality sport."

Up to $80 million over two years was committed in the 2021 federal budget to improve access to sports.

Rowing Canada ($885,000), Canadian Tire Jumpstart Charities ($6.8 million) and KidSport Canada ($4.4 million) were the first three national-level funding recipients tasked with distributing the money to community groups, which apply for it with proposals.