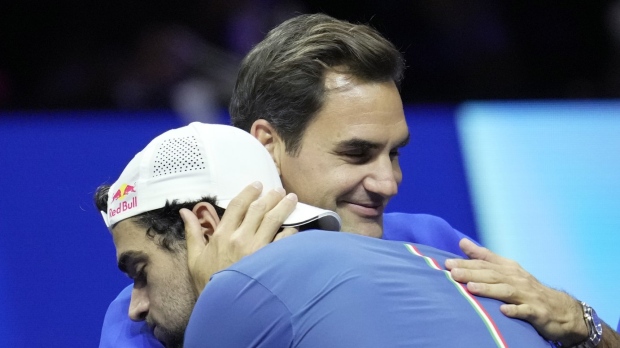 Team Europe's Matteo Berrettini, of Italy, celebrates with Roger Federer of Switzerland, after winning a match against Team World's Felix Auger-Aliassime, of Canada, on second day of the Laver Cup tennis tournament at the O2 in London, Saturday, Sept. 24, 2022. (AP Photo/Kin Cheung)

LONDON (AP) — Filling in for the retired Roger Federer at the Laver Cup, 2021 Wimbledon finalist Matteo Berrettini put Team Europe back in front by edging Team World's Felix Auger-Aliassime of Montreal 7-6 (11), 4-6, 10-7 on Saturday.

Federer stuck around, though, and helped Berrettini by offering coaching advance during Saturday's opening singles match.

Berrettini, a 26-year-old from Italy, originally was listed as an alternate on Team Europe, and it was clear he would step in for Federer, who said he ran his plan to bow out after doubles past the ATP and the team captains, Bjorn Borg and John McEnroe.

Like Federer, Nadal withdrew from the three-day competition following their doubles contest.

Nadal's wife is supposed to give birth to their first child soon.

Nadal, who holds the men's record of 22 major titles, also has been dealing with injuries all season, including a torn abdominal muscle, but said he wanted to take part in Federer's farewell.

The most-anticipated matches were to follow during the night session, with the return to competition of Novak Djokovic, who has not played since winning Wimbledon in July for his 21st Grand Slam trophy.

Djokovic, a 35-year-old from Serbia, could not enter the U.S. Open because he was not allowed to fly to the United States as a foreign citizen who has not been vaccinated against COVID-19.

Djokovic was slated to do double duty Saturday, facing U.S. Open semifinalist Tiafoe in singles, before partnering with Berrettini against Sock and Alex de Minaur in doubles.