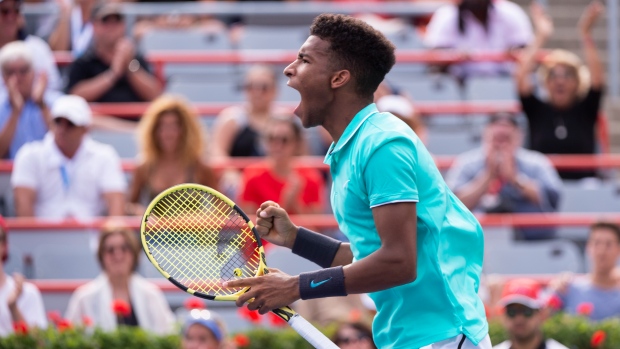 Felix Auger-Aliassime of Canada reacts in his match against compatriot Vasek Pospisil during the first round of play at the Rogers Cup tennis tournament, Tuesday, August 6, 2019 in Montreal. THE CANADIAN PRESS/Paul Chiasson

SHANGHAI - Canadians improved to 4-0 at the Shanghai Masters after wins by Felix Auger-Aliassime and Vasek Pospisil on Tuesday.

Vancouver's Pospisil won his second match in as many days and just his third match of the season following back surgery as he prevailed 6-3, 7-5 over Portugal's Joao Sousa in the second round.

Pospisil's win over the 63rd-ranked Sousa currently has him shooting up 59 spots in the rankings after starting the week at No. 248.

Pospisil won 31 of 34 points when he got his first serve in, including 15 aces.

The 29-year-old Pospisil will face No. 3 seed Daniil Medvedev of Russia in the third round.

The 19-year-old Auger-Aliassime, ranked a career-high 19th this week, saved 12 of 14 break points to fend off a challenge from the 54th-ranked Bublik.

Auger-Aliassime will meet No. 6 seed Stefanos Tsitsipas of Greece in the second round on Wednesday. The Canadian is 2-0 lifetime against the 21-year-old Tsitsipas, winning earlier this year at Indian Wells, Calif., (hard court) and London/Queen's Club (grass court).

Denis Shapovalov of Richmond Hill, Ont., will face top-ranked Novak Djokovic of Serbia in the second round on Wednesday.