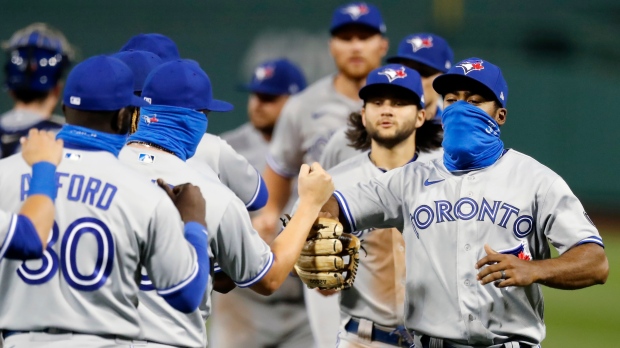 BOSTON - Five Toronto pitchers combined on a four-hitter and Lourdes Gurriel Jr. scored the tiebreaking run in the eighth inning on a groundout, lifting the Blue Jays over the Boston Red Sox 2-1 on Saturday night.

Anthony Kay (1-0) pitched 3 1/3 scoreless innings for the win. Anthony Bass picked up his third save.

Blue Jays starter Chase Anderson pitched three innings in his Toronto debut after beginning the season on the injured list because of an oblique strain. He worked off a pitch limit and gave up just one hit and one run.

Gurriel drew a leadoff walk in the eighth from Marcus Walden (0-1), moved to third on Randal Grichuk's one-out single and scored on a soft grounder by Rowdy Tellez to second baseman Jose Peraza, who was playing deep and didn't have time to turn a double play.

The Red Sox took a 1-0 lead on an RBI single by Christian Vazquez in the second.

Relievers Josh Osich and Phillips Valdez both pitched scoreless innings, but Heath Hembree gave up an RBI double to Toronto's Bo Bichette in the seventh that tied the game.

With two on and two outs in the sixth, Pillar threw out Travis Shaw at the plate as he tried to score from second off Vladimir Guerrero Jr.'s single.

In the seventh, Tellez hit a line drive toward the right field pole, but Pillar made the catch before slamming into the wall.

Prior to Friday's series-opening win, Red Sox manager Ron Roenicke acknowledged that he was considering moving Alex Verdugo up to the leadoff spot. He made that change Saturday with Verdugo taking the place at the top of the order from Andrew Benintendi, who entered Saturday's game hitting just .061 (2 for 33) with one RBI. Benintendi dropped to seventh in the order.

But a night after hitting a pair of home runs, Verdugo went 1 for 4.

Roenicke hoped that moving Benintendi down would help to relax him a little.

Benintendi grounded out before being replaced in the fourth by Pillar. Benintendi did contribute in the field, though, robbing Guerrero of a hit in the second when he dove to snare a line drive to left field.

Red Sox: Roenicke said Martin Perez will start again on Tuesday against Tampa Bay, getting an extra day of rest. The starter for Monday's series opener is to be determined and will depend on who is used from the bullpen on Sunday.

Boston optioned right-hander Ryan Weber to the alternate training site in Triple-A Pawtucket and recalled right-hander Dylan Covey. Weber has made three starts this season but struggled going 0-2 with a 9.90 ERA.

Blue Jays: RHP Matt Shoemaker (0-1, 5.91 ERA) is set to start Sunday, coming off a rough outing when he gave up six runs in 4 2/3 innings against Atlanta.

Red Sox: RHP Nathan Eovaldi (1-1, 3.94 ERA) is coming off his first loss of the season at Tampa last week in which he gave up six hits and four runs over five innings. He has thrown five or more innings in each of his first three starts of 2020.