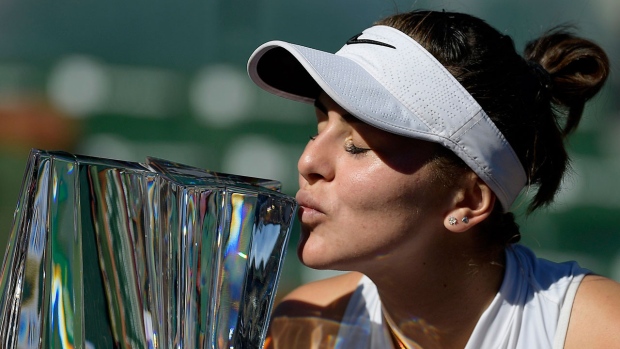 Canadian teenager Bianca Andreescu is enjoying a breakthrough season on the WTA Tour. She has defeated some of the top names in women's tennis this year and is coming off a win over Angelique Kerber in the final of the BNP Paribas Open last weekend.

Rankings jump: Andreescu, from Mississauga, Ont., rocketed 36 spots to No. 24 in the world rankings with her title at Indian Wells.

The top-32 threshold is important. At a Grand Slam, players are seeded No. 1 through No. 32 in the 128-player draw so top players will not meet in the early rounds of the tournament.

"That's an enormous benefit ... she's now got that," Tennis Canada president and CEO Michael Downey said Monday. "So unbelievable (for) confidence and it just puts her in a far better situation to continue to win."

Andreescu held the No. 152 position in the world rankings at the start of the year.

Grand Slams and the WTA Finals are the top events on the tour calendar with Premier Mandatory next on the pecking order. Premier 5 events -- like the Rogers Cup -- are one step below that.

It's the seventh career pro title for the 18-year-old from Mississauga, Ont. Six of her wins came at the ITF level, including her WTA 125K Series crown last January at Newport Beach.

Andreescu is the first Canadian to win a WTA singles title since Eugenie Bouchard won in Nuremberg, Germany in 2014.

In the zone: Many Canadian tennis fans were left flummoxed when they couldn't find the BNP Paribas Open women's tournament on television over the weekend.

Some wondered why a traditional broadcast outlet like TSN or Sportsnet didn't pick up the feed given that a Canadian had reached the final.

In Canada, sport streaming service DAZN has the broadcast rights for the WTA Tour.

Sensing the significant appetite across the country, DAZN streamed the women's final live -- for free -- on Twitter and Facebook.

Prime time: Players, broadcasters, fans and politicians turned to social media to wish Andreescu their best after her victory.

"From a wild card to the Indian Wells champion -- Bianca Andreescu just made history. Congratulations, ↕Bandreescu--! .BiancaRising," he tweeted with a tennis ball and Canadian flag emojis.

Race to Shenzhen: If the WTA Tour season ended today, both Andreescu and Kerber would be included in the field for the WTA Finals.

The top eight players will make the cut for the Oct. 27-Nov. 3 season-ending event in China.