Five Things To Know about the NHL playoffs 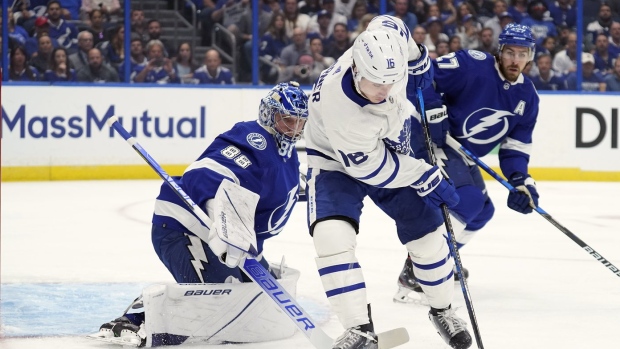 Friday night in the Stanley Cup playoffs saw the Leafs abuse Vasilevskiy again, the Oilers drown the Kings in a deluge of goals once again and a modern NHL legend add to his legacy.

Here are five things to know as we head into Saturday's post-season action:

Andrei Vasilevskiy surrendered three goals as the Tampa Bay Lightning fell to the Toronto Maple Leafs 5-2 Friday and went down 2-1 in their first-round series.

That now brings his goals-against average in this series to 3.72 with a save percentage of .890.

Though he has star talent playing in front of him, Vasiliveskiy has been just as important in the Bolts' championship runs over the last two seasons, boasting a 1.90 goals-against average in each of the last two playoff runs with save percentages of .927 and .937, respectively.

It's only three games so far, but the Russian netminder hasn't appeared to be on his game and the Leafs have capitalized.

The Edmonton Oilers smashed the Los Angeles Kings 8-2 to take a 2-1 series lead in their first-round series Friday.

The eight goals the Oilers put up was a continuation of the six they tallied in their shutout Game 2 victory Wednesday.

In total, the Oilers have outscored L.A. 17-6 so far in this series and have been getting production from all over the lineup.

The superstar duo of Connor McDavid and Leon Draisaitl have been as advertised, but Edmonton's been getting secondary and tertiary scoring for others such as Evander Kane, who potted a hat trick Friday, Ryan Nugent-Hopkins, Zach Hyman, Darnell Nurse, Kailer Yamamoto and others.

BRUINS FINALLY GET ONE ON THE CANES

The Boston Bruins topped the Carolina Hurricanes 4-2 Friday to cut their series deficit to just 2-1.

It also marked the first time in a long time, the B's managed to beat the Canes.

Leading up to Friday's win, Boston had lost five straight times to Carolina, including twice in the regular season and the two playoff defeats to open thee series.

The Bruins were outscored 26-4 in those losses.

The Minnesota Wild routed the St. Louis Blues 5-1 to take a 2-1 series advantage Friday and in doing so had goaltender Marc-Andre Fleury climb another rung of the ladder of immortality.

Fleury stopped 29 shots as he picked up his 92nd career playoff win, moving him into a tie with Edmonton Oilers great Grant Fuhr for third on the all-time playoff career wins list.

Fleury now sits 21 wins behind Martin Brodeur for a tie for second all-time. Patrick Roy has the most ever with 151.

The 37-year-old Fleury, who was shipped from the Chicago Blackhawks to the Wild at this year's trade deadline, is playing in his 16th consecutive Stanley Cup playoffs.

CAN FLAMES' STARS GET GOING IN DALLAS?

The Calgary Flames will play Game 3 of their series with the Stars in Dallas Saturday night and will be hoping to see a breakthrough of some kind, offensively.

It's been an anemic series so far in terms of goal scoring with the two teams combining for just three goals over the first two games of the series.

The Flames featured three 40-goal scorers this season in Matthew Tkachuk (42), Elias Lindholm (42) and Johnny Gaudreau (40) and of the three of them, only Lindholm has found the back of the net so far.

Calgary scored 3.55 goals per game during the regular season — sixth best in the league — on the strength of their top sniping trio who have been all but been silenced to start this series.

This report by The Canadian Press was first published May 7, 2022.