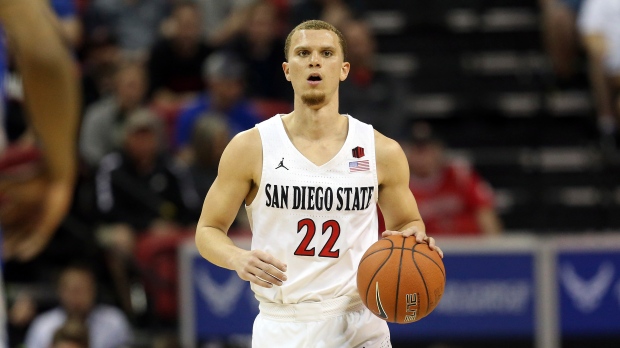 FILE - In this March 5, 2020, file photo, San Diego State's Malachi Flynn brings the ball up against Air Force during the second half of a Mountain West Conference tournament NCAA college basketball game in Las Vegas. Flynn was selected by the Toronto Raptors in the NBA draft Wednesday, Nov. 18, 2020. (AP Photo/Isaac Brekken, File)

TORONTO - As the youngest of seven kids, Malachi Flynn grew up watching his older siblings play sports. His mom Kristi was always shuffling a least one sibling somewhere in the family van that seated eight.

The newest Toronto Raptor had to fight to stand out.

“It's played a huge role . . . just being the youngest and always being around them growing up, going to sporting events. There was always something going on in the house, going to a brother's track meet, going to a sister's basketball game.

“Just seeing that, and being competitive, all the kids, you've got to fight for whatever you want. It was fun growing up in the house, always something going on.”

The Raptors drafted the San Diego State guard 29th overall on Wednesday night, then added guard Jalen Harris with the 59th pick, bolstering their backcourt amid some uncertainty.

The Raptors hope to resign coveted free agent Fred VanVleet while six-time all-star Kyle Lowry has one year remaining on his contract.

Flynn's selection as a small guard drew immediate comparisons to VanVleet and Lowry. He was just five-foot-two when he entered high school, but had sprouted to six-foot-one by the time he'd graduated.

“(The criticism) is some of the same things that I've kind of heard my whole life, to be honest. That I'm smaller, that I'm not the most athletic. Those things are true. I wish I was 6-5, 6-6,” Flynn said. “For me, it's just going out there and proving myself right, and my ability, just working hard.”

Like Lowry and VanVleet, Flynn is an excellent defender, earning both Mountain West player and defensive player of the year honours after leading San Diego State to a 30-2 record.

The big takeaway from watching Lowry and VanVleet, he said, was seeing how hard they compete.

“Being undersized, you've got to find a way to make up for that. You've got to be tough,” Flynn said. “And they both do that on the defensive end. They just throw guys' timing off. Super tough. Never back down. That's what I look at, a mindset, not so much a skillset, jut being determined on defence and taking that challenge.”

COVID-19 scrapped the March Madness championship tournament, so Flynn never had the opportunity to cap his career on college basketball's biggest stage.

“I'm bummed out that it didn't happen,” Flynn said. “Playing in the tournament would have been a super great experience, especially because I had never done it And you never know what could happen in the tournament. Every year something crazy happens.

“At this point, I can't control that. I'm super grateful that I'm with the Raptors, so I wouldn't want to change it.”

It's uncertain when Flynn and Harris will see their new home in Toronto. The Raptors have appealed to the federal government to be permitted to play at Scotiabank Arena, but with Canada's border restrictions and 14-day quarantine requirement, there's a strong chance they'll be playing their home games south of the border.

Neither Flynn, who lives just a three-hour drive south of Vancouver, nor Harris has been to Canada.

“From what I've heard, everybody likes Toronto, one person told me it's like Seattle,” Flynn said. “I've only heard good things about Toronto so I'm excited to finally get out there.”

Harris, who's from Dallas, has heard Toronto is “pretty cold.”

“I spent time in Reno, so I'm a little used to the winter, but I'll bring some jackets, that's definitely in my preparation,” said Harris, who starred for Nevada last season.

Flynn and Harris played against each other in the Mountain West conference.

“I enjoyed playing against him. Well, I didn't enjoy it 'cause he was killing us,” Flynn said of his new teammate.

Harris, who also played baseball and football growing up, was also a late bloomer. But in his one season at Nevada, he was one of the NCAA's most productive players, averaging 21.7 points, 6.5 rebounds and 3.9 assists a night.

The six-foot-five Harris also credits his athletic family for his success. His mom Karlin Kennedy dad Erion Harris both played for SMU. His mom was almost five months pregnant when she played in the NCAA tournament as a sophomore in 1988.

“Their impact has been phenomenal honestly,” Harris said. “I was born with a basketball in my hand. It was never forced on me though. It was always an option. I played the other sports so I had the chance to do other things. They have literally done everything they can to get me here.”

His dad still does on-court work with Harris and writes some of his training program.

But who's the best player in the family?

“In both cases, it's someone that we're very happy with the fact that they were still on the board at the time of the pick, so that's always a positive,” he said.

After the longest pre-draft period in NBA history, two newcomers won't have long to wait to join their new team. Training camps open Dec. 1, and the season tips off Dec. 22.