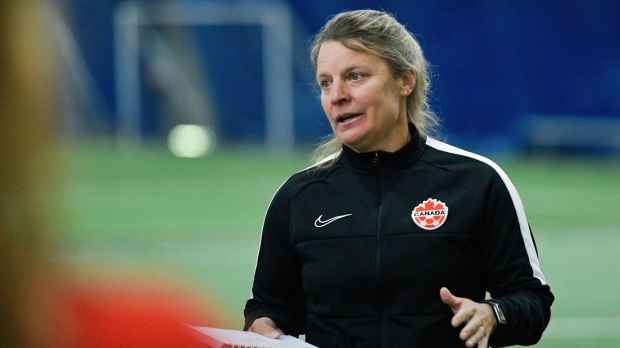 Soccer coach Cindy Tye is shown in a 2022 handout photo. Canada opens play against South Korea on Thursday at the FIFA U-20 Women's World Cup in Costa Rica, kicking off a challenging first-round schedule that also features games against France and Nigeria. THE CANADIAN PRESS/HO-Canada Soccer-Martin Bazyl

Two second-half goals by Magnaba Folquet, including one off a header to snap a scoreless game, helped France defeat Canada 3-1 in the FIFA under-20 Women's World Cup on Sunday at Estadio Nacional de Costa Rica.

While Canadian coach Cindy Tye's players did a good job of controlling ball possession, it was France who did the most damage when they had it, getting 10 shots on target compared to two for Canada. France was credited with 29 attempted shots, compared to five for Canada.

France, which had a goal disallowed in the second minute of stoppage time in the first half after it was ruled offside, got on the scoreboard in the 51st minute, then added an insurance marker 14 minutes later.

Esther Mbakem-Niaro added a third goal for France in the 88th minute.

Olivia Smith of Canada scored in the sixth minute of stoppage time in the second half to spoil France's shutout bid.

Both teams came into this Group C match sporting 0-1 records. Canada had lost 2-0 to South Korea on Thursday, while France lost 1-0 to Nigeria, also on Thursday.

Canada, eliminated from World Cup contention with the loss, will play against unbeaten Nigeria on Wednesday, while France faces South Korea.

"The kids have taken everything that we have thrown at them and they have grown throughout this tournament, but now they are going to rest and reset to face Nigeria in a few days," said coach Tye.