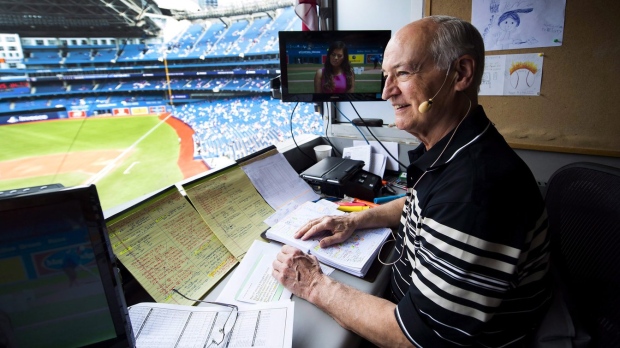 Basketball connections helped set Jerry Howarth on a path to the baseball big leagues, a journey that included a 36-year run as a radio broadcaster for the Toronto Blue Jays.

Howarth was recently rewarded for his broadcasting excellence with a nomination for the 2023 Ford Frick Award. The winner of the annual honour from the baseball Hall of Fame will be announced Wednesday.

"Winning is not important to me," Howarth said. "Just to be nominated is the honour in and of itself and (something) I'm so appreciative of."

Before he became a full-time voice with the Blue Jays alongside Tom Cheek in 1982, Howarth called minor-league games for the Tacoma Twins and Salt Lake City Gulls. He also served as a radio broadcaster for the Utah Pros of the Western Basketball Association.

Howarth's big-league dreams appeared stalled around the turn of the decade. An economics grad, he took a job as an assistant economic development director with the chamber of commerce in Salt Lake.

Just a few months into his tenure, Howarth's boss told him that Utah Jazz general manager Frank Layden was in his office and wanted to talk.

A lunch date was set with Howarth, Layden and team owner Sam Battistone. Layden told Howarth he'd heard him call Gulls games and thought he might be a good fit for a position with the NBA team.

"He said if you want to fulfil your dream, you cannot do it at the chamber of commerce because the longer you're there, the (more) removed you will become from an opportunity to be a major-league broadcaster," Howarth recalled in a recent interview.

"Come with me, be our group sales director, get back in the sports arena, and I think it will really improve your chances of doing what you really want to do in your heart."

That sales position led to Howarth working for a radio station, and the Blue Jays eventually came calling.

Howarth and Cheek — a duo affectionately known as 'Tom and Jerry' — were on the mic as Toronto rose to prominence in the American League East.

"I think I'm most proud of the fact that I broadcast every game individually as if it were a white, blank canvas," Howarth said from Toronto.

"I artistically painted it to the best of my ability and then I initialled it in my mind in the lower right-hand corner."

"I enjoyed every moment of my 36 years," said Howarth, who also coached high school basketball in Toronto for over two decades. "I wish Tom was still here to be a part of this."

An avid duplicate bridge player, Howarth was halfway through an online game when he received an email from the Hall informing him of the nomination.

Longtime Montreal Expos broadcaster Jacques Doucet is one of nine other finalists for the Frick Award. He was also nominated for the honour in 2019.

Doucet, a Montreal native, spent 33 years (1969-2004) as the Expos' play-by-play radio voice on their French network. He returned to the booth in 2012 as the Blue Jays’ French-speaking TV voice.

Howarth, a native of York, Pa., was honoured by the Canadian Baseball Hall of Fame with the Jack Graney Award in 2012 for lifetime contributions to baseball in Canada.

He was a recipient of the Sports Media Canada award for Achievement in Broadcasting in 2003 with Cheek and again individually in 2016.