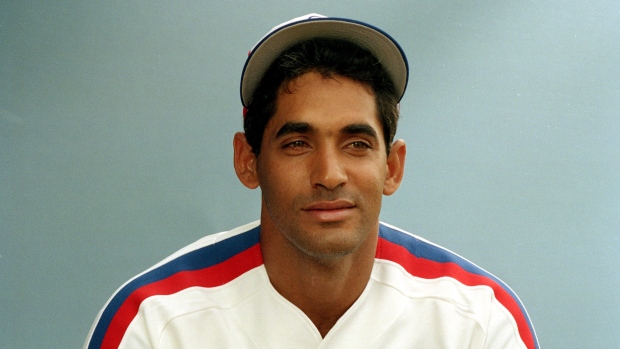 Damaso Garcia is shown in a 1989 file photo as a member of the Montreal Expos. Former Toronto Blue Jays second baseman Garcia, a two-time all-star and major part of the club's rise to prominence, has died at the age of 63. THE CANADIAN PRESS/AP

TORONTO - Former Toronto Blue Jays second baseman Damaso Garcia, a two-time all-star and a big part of the club's rise to prominence in the 1980s, has died at the age of 63.

Garcia, who had a malignant brain tumour removed 29 years ago, died Thursday in his native Dominican Republic, according to ESPN.

“We are saddened to learn of the passing of former Blue Jays infielder, Damaso Garcia,” the Blue Jays said in a statement on their official Twitter account. “Our thoughts are with his loved ones at this difficult time.”

“We loved Damo and his family. We are so glad that we had a chance to go by and visit with him when we left Tony's Funeral just recently,” former Blue Jays outfielder Jesse Barfield, who played six seasons in Toronto with Garcia, posted on Twitter. “He recognized us although he wasn't able to speak, his eyes did the talking for him.

Garcia played seven of his 11 major league seasons with the Blue Jays, helping the club transition from its rough expansion days into a force in the American League East.

He helped the Blue Jays to their first winning season, and first of 11 straight, in 1983. He was an integral part of Toronto's first AL East pennant in 1985.

He played all but 130 games of his major-league career as a Blue Jay.

Defensively, Garcia formed a lethal double-play combination with Fernandez. The two were part of the Blue Jays' core of Latin American stars that included George Bell and Alfredo Griffin.

While soft-spoken, Garcia had a volatile side.

In 1986, a struggling Garcia famously burned his uniform in Oakland in a bid to end a slump. Manager Jimy Williams was unimpressed, thinking he was disrespecting the organization.

“He did it out of frustration,” Fernandez said at the time. “I know Damo, Damo is a very proud man, Latin players are very proud, and sometimes you are so frustrated you don't know how to express that frustration and the best way for him to express that was by burning.”

That same season Garcia and teammate Cliff Johnson almost came to blows over Johnson's time in the batting cage.

Garcia was signed in 1975 as a free agent by the Yankees by legendary scout Epy Guerrero, who eventually moved to the Blue Jays. Garcia was traded along with Chris Chambliss and Paul Mirabella to Toronto in November 1979 for Rick Cerone, Tom Underwood and Ted Wilborn.

He finished fourth in AL rookie of the year voting in 1980 after hitting .278 with 46 runs batted in and 13 stolen bases.

Garcia brought Griffin, his friend and teammate, as his guest to the 1984 all-star game. When Detroit's Alan Trammell was injured the day of the game, American League manager Joe Altobelli summoned Griffin as his replacement and Garcia and Griffin renewed their infield partnership for several innings.

Garcia remains one of only a handful of Blue Jays to seal four bases in one game.

He moved on after the '86 season, traded to the Atlanta Braves with Luis Leal for Craig McMurtry. The deal reunited him with former Jays manager Bobby Cox.

Garcia had expected the deal and did not hide his thoughts, taking some shots in an interview with the Globe and Mail that season, He was critical of Williams, then a rookie manager, and objected to being shifted from the lead-off position.

Still he said he would hold no grudges against the team's front office when moved.

“They gave me my first real chance in the big leagues and, most of the time, they were fair to me... But wherever I'm playing next year, I'll be proving to them that I can still do the job - and do it well,” he told the Globe.

“I want to emphasize his trade had nothing to do with his attitude,” he added.

Garcia did not play in the majors in 1987 and was released in 1988 after just 21 games with the Braves. After a cup of coffee with the Dodgers, he played his final season in 1989 with the Montreal Expos.

In 1992, he came back to Toronto to throw out the ceremonial first pitch in Game 1 of the ALCS between the Jays and Oakland. Garcia had been undergoing treatment for a brain tumour the previous year.

“I feel like I've been through a war,” he said.

The SkyDome crowd gave him a standing ovation as he threw the ball to Griffin, his friend and former teammate.

This report by The Canadian Press was first published April 15, 2020.