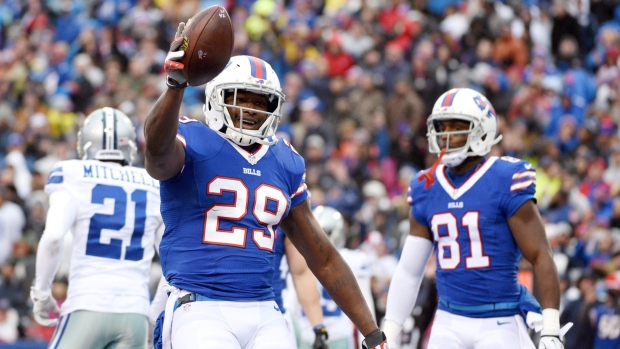 Buffalo Bills running back Karlos Williams (29) celebrates after scoring a touchdown against the Dallas Cowboys during the first half of an NFL football game, Sunday, Dec. 27, 2015, in Orchard Park, N.Y. Karlos Williams isn't coming to the CFL with a chip on his shoulder but does have something to prove to himself. THE CANADIAN PRESS/AP, Gary Wiepert

TORONTO -- Karlos Williams isn't coming to the CFL with a chip on his shoulder.

But he does have something to prove -- to himself.

The six-foot-one, 225-pound running back signed with the Toronto Argonauts this week. Williams last played football in 2015 with the NFL's Buffalo Bills, where he made a significant impact in his rookie season before his career was derailed by three suspensions for violating the league's substance abuse policy for marijuana use.

The most recent suspension was a year-long ban handed down June 28, 2017. The NFL reinstated Williams last February.

"There's no chip and here's why," Williams said. "My mission was to be reinstated.

"People who don't know me personally don't know how it works to live fast, make a lot of money and be pushed into the spotlight. Not everybody is used to it. It hit me fast and I wanted to enjoy it but I think I enjoyed it too much. I've been given an opportunity . . . it may work out, it may not but I am truly blessed and thankful to sign with Toronto."

A converted safety at Florida State, Williams ran for 1,419 yards and 22 TDs in 26 games over his final two seasons, helping the Seminoles win the '14 NCAA crown. That year, Williams was investigated by Tallahassee, Fla., police in an alleged domestic abuse case but no charges were filed.

Williams went in the fifth round, No. 155 overall, of the 2015 NFL draft to Buffalo. He tied an NFL record with TDs in his first six games en route to rushing for 517 yards (5.6-yard average) and seven touchdowns while adding 11 catches for 96 yards and two scores.

But Buffalo released Williams in August 2016 after he reported to camp overweight. Williams cited his poor conditioning on being supportive of his pregnant fiancee.

"I like to eat and her being pregnant gave me an excuse to eat," Williams said. "She'd wake up in the middle of the night and I wasn't going to sit there and watch her eat alone because I didn't want her to feel bad."

Williams' issues compounded when the NFL suspended him for four games that same year after testing positive for marijuana use. He joined the Pittsburgh Steelers practice roster Oct. 11, 2016 but received a second ban for 10 games weeks later.

He re-signed with Pittsburgh following the suspension but was released less than two months later. In June 2017, Williams received the year-long penalty.

"I got myself reinstated by being clean and I've been clean since," Williams said. "It's proving to myself I can still do it.

"I believe in myself that I can stay clean and play football."

Williams -- whose older brother, Vince, is a defensive tackle with the Steelers -- isn't concerned about succumbing to temptation in Canada, where pot use is legal.

"I wanted to stop, I wanted to prove to people I could go without and I've done that," he said. "I don't think there'll be an issue."

Williams isn't the first running back with pot issues to come to Toronto. Former Heisman Trophy winner Ricky Williams, also a running back, spent the '06 season with the Argos while serving a season-long NFL suspension for marijuana use.

Toronto also has a history of giving troubled NFLers a second chance. The 2004 Grey Cup-winning team, coached by current GM Mike (Pinball) Clemons, featured receivers Robert Baker, Andre Rison and R. Jay Soward, who all had off-field issues prior to joining the Argos or during their tenure.

"His skillset and short but exceptional professional resume is compelling," Clemons said of Karlos Williams. "But his passion to bounce back is what makes this signing so compelling."

Williams said his story revolves around a young man getting swept up in a glamorous lifestyle.

"Life happened fast," Williams said. "Being a knucklehead and having a lot of money . . . I made some bad choices.

"I suffered a concussion (in Buffalo) and chose to self medicate and that led to a bad habit of usage. I haven't played football since 2016 (when released by Pittsburgh) and it was something I had to grow up from and go through. But I've grown up."

Williams currently works at Victory Home Repair, a remodelling business in his hometown of Davenport, Fla. He's also been diligent in having a presence in the lives of his eight children.

"Chasing a child's dream is what I call football. Being able to have a real job and provide for your family and take care of your wife and kids, that's important."

Williams currently lives with his finance and their three children -- daughters Kylie, 5, and Koda, who turns two next month, and son Kason, 3. He's also close with his other five kids -- three boys living in Pittsburgh and two other boys in Orlando, Fla.

"The three mothers of my kids do a great job, my hat goes off to them," Williams said. "My kids are split up but they know their siblings, they love each other and when they get together it's a great time.

"Sometimes you have to give up chasing the childhood dream to accomplish the major goal, which is just being a great dad and providing for your family."

Williams says his children are his greatest joy.

"The proudest moments of my life were the days my kids were born," he said. "Seeing them looking into their father's eyes and just knowing I'm responsible for this person is something you can't replace.

"My kids give me life. It's not easy, I can say I'm not always the best dad, I'm not always available because my kids are spread out but I do the best I can and my kids know their dad loves them."

Williams will return to FSU next month to finish his sociology degree and follow in the footsteps of his three older siblings -- a sister and two brothers -- who've all earned at least one college degree. Williams hopes to put that to use teaching and coaching high-school football.

"We all have kids now," Williams said. "It's important we set that standard of going to school and graduating from college."

Williams served as the offensive co-ordinator this season at Ridge Community High School, his alma mater in Davenport. But Williams said coaching is more than just Xs and Os, it's being able to share his story with young players and help them and their families with the college recruiting process.

"Yeah, I missed the game -- Hall of Famers miss the game -- but I've got closer to it," he said. "To be able to tell your story each and every day is pretty cool because those young guys want to learn and soak up as much football knowledge as possible."

Clemons credits John Murphy, Toronto's vice-president of football operations, with the patient pursuit of Williams. Williams was surprised to hear from the Argos, who reached out to him shortly after he appeared on a radio podcast.

"I guess someone was listening," Williams said. "I don't know much (about the CFL) but I know guys there like Marcus Tucker (a receiver with Hamilton) and James Wilder Jr. (a former FSU teammate released this week by Toronto).

"I know it's competitive football and many people take a lot of pride in it."

Williams said he's very capable of contributing as a receiver in Canada.

"I've got hands, definitely," he said. "Football is football in my mind and I've been good at football since I was a child.

"I know I've been away from football but I've had time to reflect on life and kind of get away from living fast in the NFL. I can see the CFL is more focused on the actual football side of life . . . and like I say, it's all about the opportunity."

This report by The Canadian Press was first published Nov. 28, 2019.