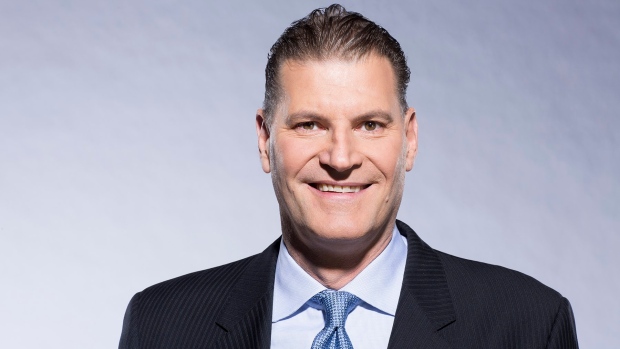 Longtime CFL and NFL offensive lineman Chris Schultz, shown in this handout image provided by TSN, has died after suffering a heart attack. The native of Burlington, Ont., was 61. The Toronto Argonauts confirmed the death today. fter his playing career, Schultz did broadcasting work with TSN and the Argos' radio team. THE CANADIAN PRESS/HO-TSN

TORONTO - Friends and fans remembered Chris Schultz as a gentle giant, who became a respected TV and radio analyst after a successful playing career with the Dallas Cowboys and Toronto Argonauts.

Schultz, a native of Burlington, Ont., died Thursday after suffering a heart attack. He was 61.

At six foot eight and 277 pounds during his playing career, Schultz was hard to miss on and off the field. The former offensive tackle was a big man with a grip to match.

“He was a genuine personality. He was himself,” said TSN broadcaster Rod Smith, a longtime friend and colleague. “There was no pretence to him.

“He could be gentle with people. He always asked about my family. But at the same time, he was strong, he was imposing. And oh that handshake. It was the most crushing handshake - and I've got big hands - that I've ever experienced in my life.

“I think of him right now and I just think of shaking his hand. You always had to be ready.”

In an era when a Canadian in the NFL was something special, Schultz turned heads when he was drafted by America's Team in 1983.

Taken in the seventh round (189th overall) after a college career at the University of Arizona, Schultz played 21 games for the Cowboys from 1983 to 1985 under Hall of Fame coach Tom Landry before returning home to play for the Argonauts in 1986.

Toronto had selected Schultz in the first round (seventh overall) of the 1982 CFL draft.

“Chris Schultz was made to play football, or football was made for Chris Schultz,” Argonauts GM Michael (Pinball) Clemons said in a statement.“ Either way it was a symbiotic relationship â€¦ His passion reverberated on radio, television, coaching kids or walking the dog. He was always willing to talk football.

“I'm disappointed because he had more to give, and my fervent hope is he knew how much he was loved,” he added.

Clemons, Schultz and quarterback Matt Dunigan, who joined Schultz as a TSN analyst, combined to win the 1991 Grey Cup for the Argos, capping a season to remember under the ownership of Wayne Gretzky, John Candy and Bruce McNall.

Schultz also played in the 1987 Grey Cup, which saw the Argos lose on a last-second Edmonton field goal.

After his playing career, Schultz moved into radio before spending 20 years as an analyst for TSN. He spent the last two seasons as colour commentator on the Argos' radio broadcasts.

Smith recalls interviewing him back for a broadcast position in 1998.

“I remember doing this audition with him and immediately being impressed by not only his knowledge and his passion but just his presence. He was a big man with a big presence,” he said in an interview. “And I could tell instantly how good he was going to be on television.”

Schultz got the job and became a fixture on TSN's CFL panel.

Bell Media senior vice-president Stewart Johnston called Schultz “a gentle giant who brought passion, dedication, and energy to his coverage of the game.

“Chris was a unique voice in Canadian football broadcasting, and an iconic figure to fans across the country.”

“A big bear of a man but so funny, warm and welcoming,” added TSN hockey analyst Bob McKenzie, who shared the same seat as Schultz when football turned to hockey in the network's studio.

Schultz took his broadcast duties seriously. Part of a panel that could occasionally take a comedic detour, he would look to stick to football and ensure everyone had their say.

“He was a real student of the game,” said author/CFL historian Paul Woods.

Schultz would be one of the last Argos to leave the locker-room, staying to work out or watch film. It would serve him well in his role as analyst.

Woods is author of “Bouncing Back: From National Joke to Grey Cup Champs,” which tells the story of the Argos in the early '80s. He interviewed Schultz for his next book, expected out this year, which focuses on the years around the '91 Grey Cup victory.

Woods, a former Canadian Press reporter and manager, says while the 1991 Argos were a relaxed bunch who liked to have fun during their pre-game walkthroughs, Schultz was all business.

He told Woods he had to operate on the field as a robot, in a zone.

“He was an intense guy,” said Woods, noting Schultz was once ejected from a pre-season game after getting into a fight with several Winnipeg Blue Bombers.

Away from the job, Schultz was a private man. Mike Hogan, who shared the Argo radio booth with Schultz, called his friend a “complex” person who “liked to separate work life from real life.”

On the job, he shone brightly.

“We called Chris Schultz the Big Man for so many reasons beyond the obvious,” CFL commissioner Randy Ambrosie, who played with Schultz with the Argos, said in a statement. “He had a big personality. He could make you think as easily as he could make you laugh.

“He had a big presence on CFL on TSN, breaking down each game with incredible passion, insight and joy â€¦ But most of all, my teammate and friend had a big heart. It was oversized even for his frame.”

Schultz started his football career in the Burlington Minor Football Association and played for the Aldershot Lions during high school. While he also played basketball, he looked south of the border for football opportunities, travelling by bus to Michigan State and Syracuse to gauge interest.

He earned a scholarship at the University of Arizona, where he started life as a defensive lineman before switching to the offensive line as a senior. His played for the Wildcats from 1978 to 1982, appearing in the 1979 Fiesta Bowl.

Football took a toll on Schultz's body. The big man walked with a shuffle, paying the price for past knee injuries.

Away from football, he made the Purolator Tackle Hunger program a cause close to his heart.

“When he spoke publicly about working at and with food banks, and what it meant to him and to families in need, Chris's sincerity and empathy moved everyone,” said Ambrosie. “Those moments not only made the program stronger. They made everyone who experienced them want to be better, to be more like Chris.”

“The CFL is filled with countless men and women who make it spectacular, and we lost one of them (Thursday),” said Blue Bombers coach Mike O'Shea.

This report by The Canadian Press was first published March 5, 2021.