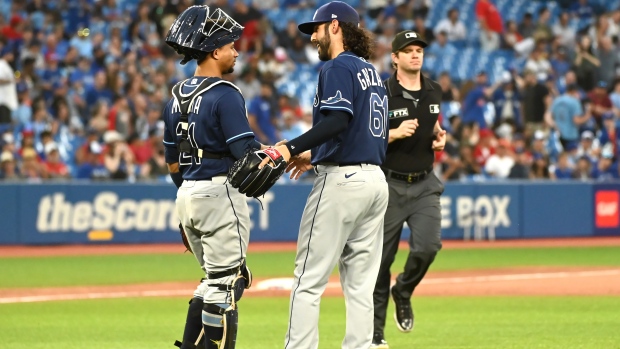 TORONTO - Back-to-back losses in a doubleheader paled in comparison to off-field concerns for the Toronto Blue Jays on Saturday.

Francisco Mejia had a two-run homer in the second inning and a solo shot in the fifth to lead Tampa Bay to an 11-5 rout of the Blue Jays hours after Isaac Paredes and Wander Franco each had a solo home run as the Rays won the first game 6-2.

The Blue Jays closed their clubhouse after the game and cancelled their post-game media availabilities.

“As many of you are aware, Mark Budzinski left early in the game tonight,” read a statement from the team. “He is dealing with a personal matter and Charlie and our coaches are with him.

“Out of consideration for Bud, we ask that you please respect his privacy at this time. Thank you.”

The Blue Jays also had a scary moment in the second inning of the first game when starting pitcher Kevin Gausman took a sharply hit ball off of his right ankle.

He lay prone on the turf in front of the mound as catcher Gabriel Moreno completed the play. After the out trainers came to examine Gausman on the field before helping him to the clubhouse.

His X-rays came back negative and Montoyo said between the games that the pitcher had a contusion.

“Just like everybody else, I was hoping that it wasn't anything worse than a contusion and that's what had happened and that's good news,” said Montoyo, who said Gausman would be considered day-to-day.

Paredes added a three-run homer and an RBI double in the late game as Tampa (42-36) earned back-to-back wins.

Bradley Zimmer had a two-run homer for Toronto (44-35) and Vladimir Guerrero Jr. added a solo bomb.

Thomas Hatch (0-1) coughed up 10 runs on 12 hits and two walks in 4 2/3 innings. Matt Gage, Sergio Romo, Tim Mayza and Adam Cimber came on in relief, with Gage allowing a run.

Tampa had lost four straight heading into Saturday's doubleheader, including losses in Toronto on Thursday and Friday.

“That was an exciting day. We had to find a way to bounce back, we did,” said Rays manager Kevin Cash. “It kind of all came together for us through the course of a long day.

“It's tough to win both games of a doubleheader, so really proud and impressed with the guys.”

EXTRA HELP - Casey Lawrence was recalled from triple-A as the 27th man for both games of the doubleheader. He pitched 5 2/3 innings of relief in Saturday's first game, allowing six runs to take the loss. Relief pitcher Max Castillo was sent down to triple-A between games to make space for Hatch on Toronto's roster.

PIRATES TRADE - The Blue Jays announced a trade with the Pittsburgh Pirates for left-handed pitcher Anthony Banda during the first game of the doubleheader. Toronto sent cash considerations to Pittsburgh in return. Righty Julian Merryweather was transferred to the 60-day injured list.

UP NEXT - Ross Stripling (4-2) will start for Toronto in the finale of the rare five-game series against Tampa Bay. Shane Baz (0-1) will take the mound for the Rays.