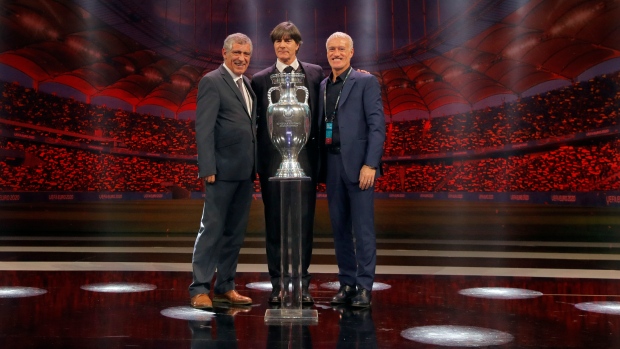 The coaches of Portugal Fernando Santos, left, Germany Joachim Loew and France Didier Deschamps who will play in group F, pose with the trophy after the draw for the UEFA Euro 2020 soccer tournament finals in Bucharest, Romania, Saturday, Nov. 30, 2019. (AP Photo/Vadim Ghirda)

BUCHAREST, Romania -- Germany, France and Portugal have been drawn in the same group at the 2020 European Championship in a tough start for the winners of the last three major tournaments.

The runner-up in Group F, which also features a playoff winner determined next year, will meet the winner of a group containing 2018 World Cup semifinalists England and Croatia.

Croatia went on to lose the final in Moscow to France, which meets 2014 World Cup champion Germany and reigning European champion Portugal in Group F.

The fourth team will be determined by the winner of the playoff path in March featuring Iceland, Bulgaria, Hungary, and Romania in semifinals and a final.

Only the top two teams in each of the six groups are certain to qualify for the round of 16 along with the four top-performing runners-up.

Wembley is the main venue for the tournament, with seven games including the semifinals and final on July 12. Glasgow's Hampden Park is paired with the north London stadium in Group D but Scotland has to qualify by beating Israel and either Norway or Serbia.

The tournament will open with Italy hosting Turkey in Rome on June 12.