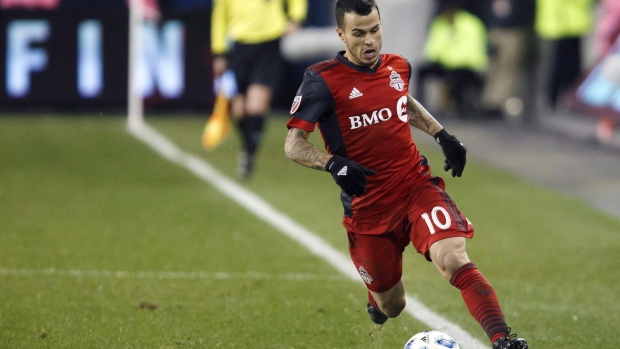 FILE - Toronto FC forward Sebastian Giovinco (10) keeps the ball in bounds as he runs up field during MLS soccer action against the Atlanta United in Toronto, Sunday, Oct. 28, 2018. THE CANADIAN PRESS/Cole Burston

Former MLS MVP Sebastian Giovinco wants to end his career with Toronto FC, taking the first step on a possible return Thursday at the MLS club's pre-season camp in California.

Giovinco, who turned 35 on Wednesday, trained with the team for the first time since leaving in January 2019 over a salary dispute. Without a contract for the present, it's now about seeing if Giovinco and Bob Bradley, TFC's new coach and sporting director, think it's a good fit.

“And now it's going to be about the fit. And Bob getting the chance to know him and him getting a chance to see Bob and where he would fit in. And then if all is good from that standpoint, we take the next steps.”

Both sides seem willing to give it a shot.

“At this point everyone's eyes are wide-open,” Manning said. “But we're saying 'Hey let's see how it goes. Let's have him train with the team. Let's see how it fits.”'

The former Juventus forward would have to go through the league's allocation process, which regulates the return of former MLS players, among others, to the league. Toronto currently stands third on the allocation list, behind Inter Miami and FC Cincinnati.

Manning said the report he got back from Giovinco's first training session Thursday was good.

“I heard he scored a goal,” Manning said with a laugh.

The Italian star left the MLS club in early 2019 when Toronto, unwilling to meet his contract demands, sold him to Saudi Arabia's Al-Hilal FC.

Giovinco, who maintained a residence in Toronto, quit the Saudi club last August by mutual agreement and has made no secret of his desire to rejoin TFC.

If he still has it, it could be a good fit.

Toronto needs some star power in attack. And having Giovinco back in the fold might also help win back fans who soured on the club after a dismal 6-18-10 season.

Giovinco, meanwhile, returns to the club that embraced him. He repaid that love with plenty of highlight-reel goals in his first go-round.

In December 2020, the diminutive forward known as the Atomic Ant was named to the league's list of 25 greatest players, alongside the likes of David Beckham, Landon Donovan, Robbie Keane and Canadian Dwayne De Rosario.

News of Giovinco being back surfaced Thursday morning when the club, which arrived in California on Jan. 18 for training camp, finally released its camp roster.

Giovinco was listed as being “invited to train,” a sign of respect to the former TFC star. Several other players were listed as “trialists.”

In four seasons with Toronto, Giovinco had 68 goals and 52 assists in 114 regular-season games (111 starts).

With question-marks over the future of designated players Jozy Altidore and Yeferson Soteldo, who are both not in camp, and Italian star Lorenzo Insigne not coming to the club until July, TFC is short on attacking options.

A club spokesman said the roster only covers players in camp, which explains the absence of Canadian midfielder Jonathan Osorio and Jamaican defender Kemar Lawrence, who are away on international duty.

Soteldo, currently with Venezuela, is expected to be on the move from TFC with talk of a swap with Mexico's Tigres for Mexican international defender Carlos Salcedo.