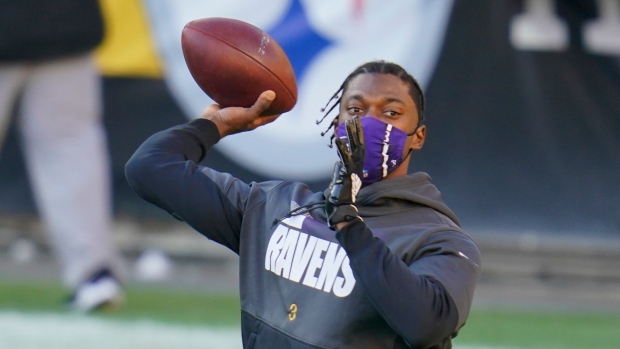 Goodell also said on a conference call that while the NFL is considering a bubble format for the playoffs, it wouldn't necessarily resemble what the NHL and NBA used in successfully in completing their seasons.

"It will take partnership and discipline to complete this season. I'm confident we'll be able to do it," Goodell said, referring the NFL Players Association, the clubs and the players.

Added Dawn Aponte, the league's chief football administrative officer: "In terms of the guidelines we have used, our guiding principle is medical and we are trying to ensure we are playing all games safely. Providing we can do so within 17 weeks, that is what our objective is and will continue to be."

Goodell and Dr. Allen Sills, the NFL's chief medical officer, noted that a bubble concept can have many iterations.

"We don't see the bubble as most refer to it in one location," Goodell said. "We feel strongly that our protocols are working. We're willing to adjust and adapt those protocols, take additional steps. But I don't see us doing the bubble in the sense that the media focuses on it."

Sills pointed to the need "to recognize whenever we think about structuring something for the teams, look at the risks and benefits. There is no plan that will be completely risk free. We have to make what we think is the best and safest decision.

"All options remain on the table and will be driven by what the data show us. We have adjusted our protocols nearly every week."

Sills also stressed that the NFL won't be seeking any preferential treatment when vaccines become readily available. He emphasized that vaccines must first go to the front-line health workers.

"We want to obviously work with authorities," Sills said. "We never want to do anything that hinders the public health effort. If it becomes appropriate for us to have vaccines available for coaches and players and staff, and not hinder the public health effort ... then certainly we will consider that. We are in no way going to 'cut the line."'

For Week 12, the NFL was forced to reschedule the Baltimore at Pittsburgh game from Thanksgiving night to Sunday, then Tuesday and finally Wednesday because of a COVID-19 outbreak among the Ravens.

Also, the Broncos played their regularly scheduled game with the Saints on Sunday despite having no experienced quarterbacks due to violations of the league's coronavirus protocols.

There's also been disruption to the Week 13 schedule because of the Ravens' situation.

Goodell said NFL protocols do not call for postponing a game because one position group is impacted by COVID-19, as happened with the Broncos.

"We will not postpone or reschedule games because of COVID-19 in a specific position group if we are comfortable the rest of the team is not at risk, which was exactly the case in Denver," he said.

"Let me be crystal clear, as we have been with our clubs since last March. Health and medical take precedence. We follow the facts, the science, and recommendations of our medical experts are first and foremost the bedrock of our decisions."

The most recent coronavirus testing showed from Nov. 15-21, 42,809 tests were administered to a total of 7,886 players and team personnel. There were 28 new confirmed positive tests among players and 42 among other personnel.

For Nov. 22-28, a total of 42,264 tests were administered to 7,819 players and team personnel. There were 33 new confirmed positives among players and 53 among other personnel.

Sills emphasized that the league and teams learn from every result.

"I think those numbers suggest to us that our clubs are doing a terrific job of avoiding risk," Sills said. "Again, we know this is hard. We're certainly not out of the woods. But you can see the effects of the procedures we've put in place.

"I think the strategic decision to close the club facilities the last two days reflects that. We made that decision after a number of weeks of discussion based on the fact of potential additional risk of exposure during the holiday season last week. We're going to continue to monitor that. We'll obviously need to continue to evolve and to adjust based on what our data shows as we move forward, but we're seeing some very positive trends in the numbers."