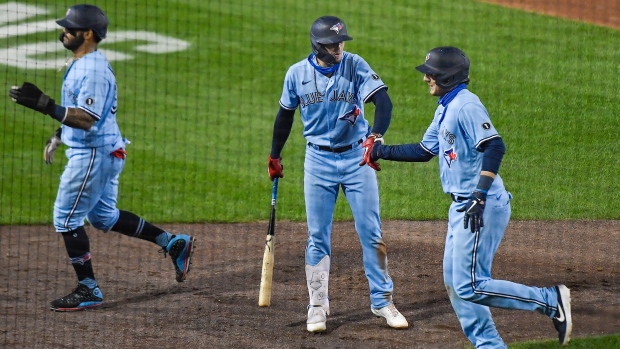 New York has lost four straight and 14 of 19, dropping into third place in the AL East, two games behind second-place Toronto and 6 1/2 back of Tampa Bay. At 21-20 overall following a 16-6 start, the Yankees have dropped into the AL's eighth and final playoff position.

Green's ERA jumped to 4.26, and Ottavino allowed six runs without getting any outs as his ERA rose to 7.82.

Toronto loaded the bases with a pair of walks and Randal Grichuk's one-out single, and first baseman Luke Voit charged Rowdy Tellez's two-hopper but allowed the ball to bounce off the palm of his glove and into foul territory for an error as a run scored.

Ottavino (2-3) relieved, and Vladimir Guerrero Jr. hit a two-run, opposite-field single that bounced past Voit and down the right-field line. Guerrero stole second and Lourdes Gurriel Jr., who had three hits, lined a fastball into left for a tying single.

Gurriel stole second, Jonathan Villar walked and Travis Shaw lined a fastball up the middle for a two-run single and an 8-6 lead after Ottavino shook off catcher Kyle Higashioka three times. Joe Panik walked, and Jansen chased Ottavino when he drove a fastball to left-centre for his first career slam for a 12-6 lead.

New York had not allowed 10 runs in an inning since CC Sabathia and Esmil Rogers were hit hard in the third inning of a 15-4 loss to Texas on May 23, 2015.

Sean Reid-Foley (1-0) won despite a bases-loaded walk to Aaron Hicks in the sixth that extended the Yankees' lead to four runs.

Voit and Hicks hit solo homers in the first off Hyun-jin Ryu, who allowed five runs and six hits in five innings.

Toronto tied the score against Jordan Montgomery on Tellez's RBI double in the first and Santiago Espinal's RBI single in the centre.

Miguel Andujar put New York back ahead with his first home run since Sept. 27, 2018, and Clint Frazier hit a two-run double in the fifth. Andujar added an RBI grounder in the ninth.

The game was the first this season between the teams, who are scheduled to face each other nine more times over the final 19 games of the regular season.

Yankees: OF Aaron Judge (strained calf) ran on the field at Yankee Stadium while starting to resume baseball activity. â€¦ OF Giancarlo Stanton (strained hamstring), also in the Bronx, was out running the bases and hitting against a machine.

Blue Jays: Toronto played without OF Teoscar Hernandez, who was placed on the 10-day injured list with an oblique injury. The team was waiting for swelling to subside before Hernandez undergoes a second MRI, but decided to sideline their leading power hitter, who is tied for second in the AL with 14 home runs. ... RHP Wilmer Font was placed on the 10-day IL with a bruised right shin. ... SS Bo Bichette (sprained knee) was scheduled to DH at Toronto's alternate training site in Rochester, where he is play in the field on Tuesday.