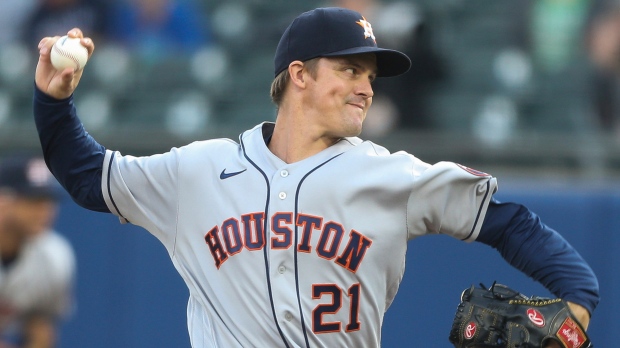 Maldonado drove in five runs and Aledmys Diaz also homered as Houston handed the Blue Jays their first loss in three games at their temporary home in Buffalo.

Greinke (6-2) gave up six hits, walked one and struck out three, throwing 102 pitches.

The win was the 214th of Greinke's career, tying him with Mark Buehrle and Rick Reuschel for 91st on the all-time list.

The Astros won for the fifth time in six games.

Randal Grichuk homered for Toronto, which absorbed its largest margin of defeat since a 20-6 loss at Yankee Stadium last Sept. 15.

Toronto starter Hyun Jin Ryu (5-3) allowed seven runs on seven hits and three walks in 5 2/3 innings. He struggled after retiring his first seven batters finished with more walks than strikeouts for the first time since April 2, 2018. Ryu fanned a season low of just one against the Astros.

The Blue Jays' bullpen hit another rough patch, as Carl Edwards Jr. allowed Diaz's homer in the seventh and Tyler Chatwood allowed hits to all six batters he faced in the eighth.

Correa hit a solo homer in the fifth for a 3-0 lead. Maldonado's second career slam broke the game open in the sixth and ended Ryu's night. Correa hit a three-run shot in the eighth to give him his 10th career multihomer game.

Entering Friday's game, seven qualifying players had a batting average of .300 or better in the American League, and five of them were Astros or Blue Jays.

Toronto's Vladimir Guerrero Jr. led with a .335 average and teammate Marcus Semien was seventh with a .301 mark.

Representing the Astros, Yuli Gurriel ranked fourth at .310 with Alvarez sixth at .304. Michael Brantley, sidelined for the last 10 games with a tight right hamstring, was fifth at .305.

Toronto dealt RHP Ty Tice, who was designated for assignment on May 22, to the Atlanta Braves for cash. Tice appeared in four games for Toronto, including his major league debut on April 9 vs. the Angels, working seven innings overall. He then pitched one inning for Buffalo on May 18.

The 24-year old, who attended the University of Central Arkansas, has a 2.07 ERA in 114 minor league games.

Astros: OF Michael Brantley did some running, and manager Dusty Baker anticipates he'll be ready to be activated when Houston travels to Boston for a series that starts Monday.

The second game of the weekend series on Saturday will feature Astros RHP Jose Urquidy (4-2, 3.02 ERA) and Blue Jays RHP Ross Stripling (1-3, 5.11). The same pitchers faced each other on May 7 in Houston, a game that the Astros won 10-4.