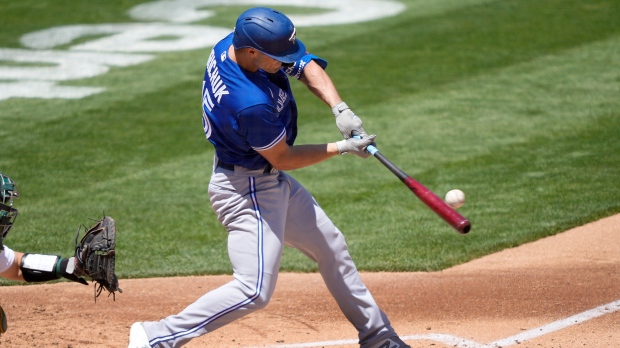 Toronto Blue Jays' Randal Grichuk (15) hits a three-run home run against the Oakland Athletics during the third inning of a baseball game in Oakland, Calif., on Thursday, May 6, 2021. (AP Photo/Tony Avelar)

OAKLAND, Calif. - Randal Grichuk homered, doubled and drove in five runs to lead the Toronto Blue Jays to a 10-4 victory over the Oakland Athletics on Thursday.

Toronto earned a split of the four-game series after dropping the first two games against the AL West leader.

Marcus Semien homered among his four hits, Danny Jansen and Teoscar Hernandez each drove in two runs and Bo Bichette and Cavan Biggio had three hits apiece for the Blue Jays, who have won five of their past eight road games.

“A four-hit game with a home run? That's a pretty good game,” A's manager Bob Melvin said of Semien. “He's a good hitter like a lot of their guys.”

Mark Canha hit his first career leadoff homer, Sean Murphy drove in two and Matt Olsen added an RBI ground-rule double for the A's, who have still won 10 of their last 14 at home.

Hyun Jin Ryu (2-2) came off the injured list to start for Toronto. He lasted five innings, allowing four runs on six hits. He walked one and struck out six.

“There was nothing wrong with me,” Ryu said through an interpreter. “I didn't have to worry about anything physically, so I am pleased. I felt better later in the game.”

Mike Fiers (0-2), in his second start of the season, went 3 1/3 innings, giving up five runs on nine hits. He walked two and struck out two.

“The biggest thing is for me to make pitches with runners on,” Fiers said. “I missed over the plate.”

Grichuk's three-run blast over the left-field fence was the first Toronto home run of the series. Jansen added his first of the season and Semien hit a solo shot in the seventh.

“I got to play in front of my mom, dad and grandparents and that's important to me,” said Semien, who played at Cal before beginning his professional career with the A's. “I had that support system when I was here. We only come out here once a year now but maybe we'll be back for playoffs.”

Two batters before Grichuk's homer, the A's recorded a double play in which Fiers struck out Vladimir Guerrero Jr. and Murphy picked off Bichette at first base.

Both managers weighed in on the Angels' decision to designate Albert Pujols for assignment on Thursday. “He's the ultimate professional,” Toronto manager Charlie Montoya said. “Hopefully it is not the end but if it is, he's a Hall of Famer. It was always fun to talk to him about baseball.” Melvin didn't have time to process the information. “First-ballot Hall of Famer is the first thing that comes to mind,” he said. “This is all just coming in. He's a class act and a fantastic player. He's given me a lot of pain.”

Blue Jays: RHP David Phelps went on the IR when Ryu was activated to make the start. ... OF George Springer (right quad strain) will remain with the team when it travels to Houston. “He can still hit in batting practice,” Montoya said.

The Blue Jays open a series in Houston on Friday with RHP Ross Stripling (0-1, 6.39 ERA) taking the mound.

The Athletics welcome Tampa Bay for a three-game series with LHP Sean Manaea (3-1, 3.48) getting the start on Friday.