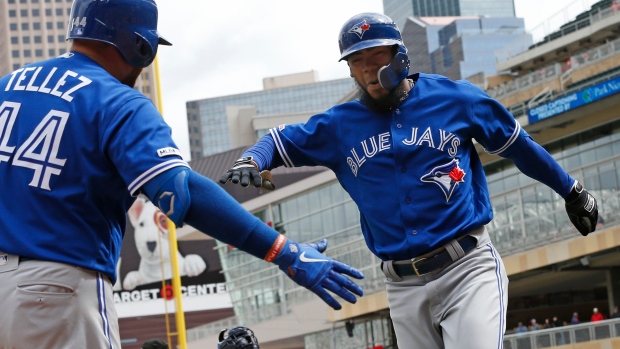 MINNEAPOLIS - The Toronto Blue Jays are finding their swing - and wins are following.

Eric Sogard added a three-run double for Toronto, who took three of four at Target Field.

“Not only are we scoring ... but we're getting some loud outs,” Grichuk said. “Early on we kind of had some quick at-bats, balls put in play or strikeouts quick. Now we're battling, putting together good at-bats, swing at good pitches.”

Toronto is hitting .217 this season, 12th in the American League; since April 9, however, the Blue Jays are hitting .256 in winning five of nine.

“We score seven runs today they all swinging the bat pretty good right now,” manager Charlie Montoyo said. “Now if Sogard stays hot, you've got Sogard and (Freddy) Galvis getting on base for those three guys. That's a good combination.”

That trio would be Grichuk, Smoak and Hernandez, the team's 3-4-5 hitters.

Smoak hit a no-doubt, two-run shot and Sogard added a bases-clearing double as part of a five-run fourth that put the Blue Jays ahead 6-3. Smoak has reached base in 19 of his last 35 plate appearances, and Sogard, called up Monday, was 6 for 12 in the series.

Grichuk hit a solo home run in the first and Hernandez had a solo drive in the eighth. Hernandez was 6 for 15 with two home runs in the series.

Struggling with his cutter, starter Clay Buchholz allowed three runs on six hits in 4 2-3 innings before Thomas Pannone, Ryan Tepera, Tim Mayza and Joe Biagini (1-1) combined to allow one run in 3 1-3 innings. Ken Giles earned his sixth save in seven chances with a scoreless ninth.

The Toronto bullpen allowed two runs in 13 2-3 innings during the series.

Eddie Rosario homered twice for the Twins, against a right- and left-handed pitcher.

“Some of the stuff he does you go, 'Wow. That's pretty impressive,”' Twins manager Rocco Baldelli said. “To come in facing the lefty (Mayza) and put a swing on that first pitch, people just don't do that because it's borderline impossible. You just don't see things like that. But he does things that other people don't do or can't do.”

Michael Pineda (2-1) had his worst start of the season, allowing six earned runs and seven hits in 3 2-3 innings. He struck out one batter, threw a wild pitch and allowed two home runs to equal his combined total from his first three starts.

Rosario homered and Willians Astudillo and Jonathan Schoop both ended 0-for-15 stretches with singles in a three-run second inning for the Twins.