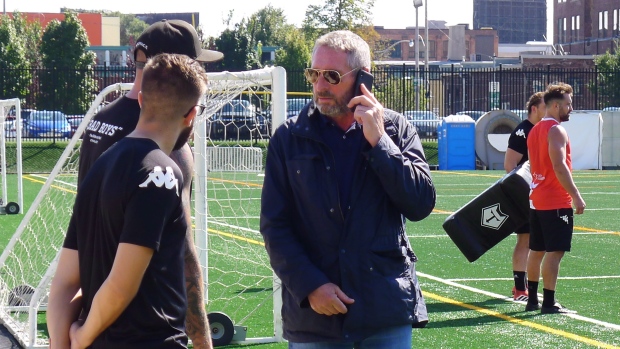 Toronto Wolfpack owner David Argyle is seen at a practice at Lamport Stadium in Toronto on Wednesday, Sept. 12, 2018. THE CANADIAN PRESS/Neil Davidson

TORONTO - A group looking to bring rugby league to New York has pulled out of the Toronto Wolfpack sweepstakes, citing the cost of reviving the troubled transatlantic franchise plus complications involving minority shareholders.

New York Rugby League was one of four groups looking over the Wolfpack's financials.

“We've withdrawn quietly,” said Ricky Wilby, bid lead for the New York outfit. “We've done probably about two weeks worth of research and due diligence into the Wolfpack and where they are. And financially it just doesn't make sense for us to get involved, if we're being completely honest.”

The Wolfpack stood down July 20, saying they could not afford to resume play with the other 11 teams in England's Super League. The team was subsequently put on the selling block with majority owner David Argyle saying he was stepping aside.

The Wolfpack says three potential buyers are still examining the franchise's books: one from Canada, one from the United Kingdom and a third from the U.S.

They face a deadline with Super League, which tore up Toronto's participation agreement in light of the team's withdrawal, saying an application to return to the league will have to be submitted by the end of August.

Wilby said it would have taken close to US$10 million to keep the Wolfpack afloat for the next 18 months - some $3 million through the end of this year (including debt and unpaid wages) and another $6 million next year.

“And that's all while not owning 100 per cent of the club,” he added. “The minority shareholders were really hanging on, wanting to be paid out.

“And it's like 'Seriously, this club has lost close to $30 million Canadian over the last four years. And you're holding out wanting us to pay out another $1 million to buy out you 10 1/2, 11 per cent share holding?'

The minority shareholders include Eric Perez, the Wolfpack's co-founder and first president who is now part of the ownership consortium and front office of the Ottawa Aces.

Wilby said his group's plan had been to keep the Wolfpack in Toronto, to maintain the rivalry with its proposed New York franchise.

“And we thought by having the team in Toronto we could really push our case to get a team put into the Super League in New York rather than having to work our way through (the lower divisions),” he added.

The New York bid has pushed back its original plan to have the team take part in the 2021 Challenge Cup with league play to follow the next year. It is now looking at a possible 2022 start - in what division to be determined later.

The bid group has had talks about playing down the line at Red Bull Arena in Harrison, N.J., but is looking in the short-term at venues at Kean University or Hofstra University in Union, N.J., and Hempstead, N.Y., respectively.

Toronto players have not been paid since June 10, when the June 1 payroll finally arrived. Wilby said his group would have paid the players immediately upon completion of the sale.

Several players including Ricky Leutele (Melbourne Storm) and Gareth O'Brien (Castleford Tigers) have already signed with other clubs on loan for the rest of the season. Former All Black Sonny Bill Williams is expected to join Leutele in Australia's NRL, signing with the Sydney Roosters once he emerges from quarantine.

The Rugby Football League, the sport's governing body, says it is doing what it can but pointed the finger at the Toronto ownership.

“Every rugby league club is a separate business entity with its directors being responsible for its operation including its finances and management,” it said in a statement.

“We continue to remind the Wolfpack ownership of their responsibilities and the importance of providing further support, as has been promised,” it added.

But it noted that the Canadian-owned Wolfpack are not eligible for some of the help that English clubs are. The RFL said all Wolfpack players and staff have been offered “mental health welfare support.”

Williams, who is under contract to Toronto in 2021, said while he believes he has another year in him, the future remains unclear with the Wolfpack, who had lost all six games in Super League prior to the league shutting down in March.

“I enjoyed my time there with the lads, I'm not going to lie,” he told Australia's Channel Nine. “I loved the coach (Brian McDermott), I loved his philosophy. I just think we were a little bit caught out in the sense that we had players that were playing against professional truck drivers the year before (in the second-tier Championship), you could say.

“Going up to Super League level, we were caught out a little bit out of our depth. But from a playing point of view, I loved everything about being around the boys and what not.”

The 35-year-old Williams said he feels sorry for some of his younger Toronto teammates who were living paycheque to paycheque - and are now going without.