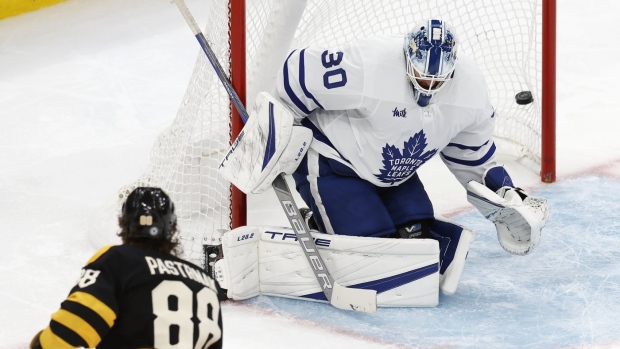 BOSTON (AP) — Matt Grzelcyk scored the tiebreaking goal with 76 seconds left to give Boston a 4-3 victory over the Toronto Maple Leafs on Saturday night and prevent the Bruins from losing back-to-back games for the first time all season.

Toronto led 1-0 and 2-1 before Boston took its first lead at 3-2 on A.J Greer’s goal midway through the second period. But Auston Matthews, returning from an undisclosed injury that cost him two games, tied it for Toronto early in the third.

It stayed that way until Grzelcyk slapped the puck through a screen and into the net. Toronto goalie Matt Murray complained that he had been interfered with, but there was no challenge.

The Maple Leafs had beaten Boston four straight, dating to before the pandemic.

Michael Bunting and Pierre Engvall also scored for the Maple Leafs, and Murray made 30 saves.

Boston’s Nick Foligno and Toronto’s Wayne Simmonds got into a fight in the first period that lasted several minutes before they tired themselves out and the officials moved in to break it up. When they did, Simmonds tapped his former Maple Leafs teammate on the head approvingly.

But there was more animosity at the end of the second period, when the teams hesitated before leaving the ice. Simmonds needed to be escorted back to the bench while he was jawing with Greer. Both players were given 10-minute misconduct penalties.

HE SHOOTS, HE SCORES

The Bruins had killed off 18 straight penalties before Bunting opened the scoring with a power-play goal. Boston tied it when the Maple Leafs left Bergeron alone in the slot, and he nonchalantly redirected a pass from Brad Marchand into the net.

Engvall gave Toronto another lead early in the second when he split two defencemen with a wrist shot that beat Ullmark. Three minutes later, Pastrnak deflected a pass in the Boston zone and chased it down, racing down the left side with Marchand closing on the right.

Pastrnak kept it, and put the puck through Murray’s legs to make it 2-2.

Midway through the second, Ullmark lost his stick but still managed to make a diving glove save — despite Boston forward Taylor Hall crashing into him — on Mark Giordano. The Bruins came away with the puck, with Tomas Nosek bringing it into the Toronto zone, drawing away a defender before passing it to Foligno, who centred it to Greer for the goal.

Boston’s Pavel Zacha hit the post of an open net on a shot that could have given Boston a 4-2 lead. Instead, Matthews tied it 3-3 three minutes into the third.