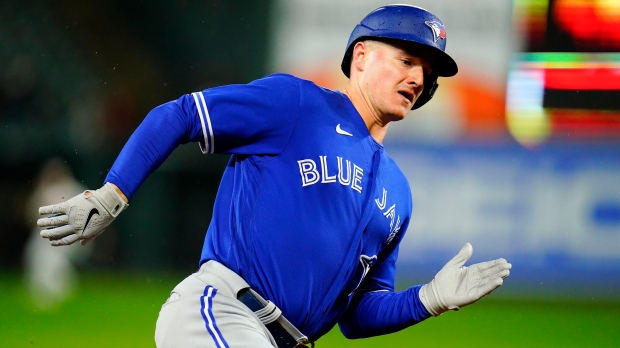 Toronto Blue Jays' Matt Chapman runs the bases while scoring on a two-run single by Whit Merrifield during the second inning of a baseball game against the Baltimore Orioles, Monday, Oct. 3, 2022, in Baltimore. Blue Jays' Teoscar Hernandez also scored on the hit. (AP Photo/Julio Cortez)

BALTIMORE (AP) - Vladimir Guerrero Jr. hit his 32nd homer and the Toronto Blue Jays edged closer to the top seed for an American League wild card series with a 5-1 rain-shortened victory over the Baltimore Orioles on Monday night in game shortened by rain.

Play was halted by rain with Toronto batting with two outs in the eighth and called after a wait of 55 minutes.

Toronto would host a best-of-three playoff series starting Friday if it wins one more game or Seattle loses at least one of its final four games.

Whit Merrifield went 3 for 3 with an RBI for the Blue Jays, who have won for straight.

Before a crowd of just 10,642, Jose Berrios (12-7) allowed one run and three hits with five strikeouts and three walks over six innings.

Tim Mayza earned his second save.

Baltimore's Jorge Mateo stole his American League-leading 35th base, one ahead of teammate Cedric Mullins.

Baltimore already had secured a winning season for the first time since 2016.

Toronto took a 2-0 lead off Dean Kremer in the second on a single by Merrifield that scored Teoscar Hernandez and Matt Chapman.

Guerrero boosted the lead to 3-0 with a 422-drive over the left-field wall in the third.

The Orioles got the board in the bottom half on a sacrifice fly by Anthony Santander that Hernandez was able to snag with a running, leaping catch at the right-field fence.

A wild pitch by Kremer allowed Merrifield to score in the fifth as the Blue Jays increased the lead to 4-1.

Kremer (8-7) allowed four runs and six hits with four strikeouts and one walk over six innings. He ends the season with a 3.23 ERA over 21 starts.

Chapman added an RBI single in the eighth.

Orioles catcher Adley Rustchman is the winner of the 2022 Most Valuable Oriole Award. Rutschman is the third rookie to win the award since its inception in 1954, joining right-handed pitchers Gregg Olson in 1989 and Rodrigo Lopez in 2002.

Blue Jays: OF Lourdes Gurriel Jr. (left hamstring strain) could be available when the postseason begins on Friday.

Orioles: RHP Felix Bautista, who leads the team with 15 saves, has been shut down for the season with left knee soreness.

Blue Jays: RHP Mitch White (1-6, 5.21) has pitched against the Orioles once in his career, allowing five runs on three hits, two strikeouts and three walks over 2 1/3 innings last month.