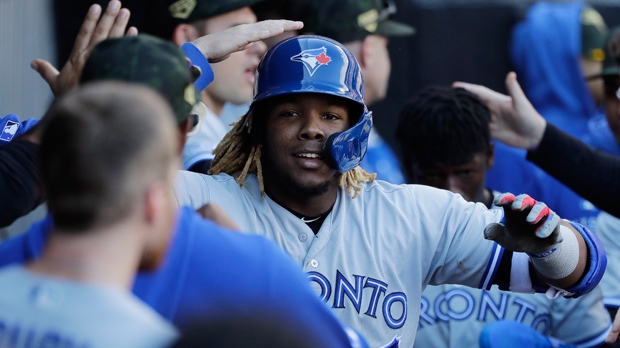 Toronto Blue Jays' Vladimir Guerrero Jr., celebrates with teammates after hitting a two-run home run during the eighth inning of a baseball game against the Chicago White Sox in Chicago, Sunday, May 19, 2019. (AP Photo/Nam Y. Huh)

Guerrero has hit all four of his homers in the last six games. The highly touted 20-year-old didn't homer in his first 13 games after making his major league debut in late April.

Guerrero's two-run drive broke a 1-all tie in the eighth inning. Jansen added a two-run homer in the ninth.

Jose Abreu drove in two runs for the White Sox.

Daniel Hudson (3-1) worked a scoreless seventh. Ken Giles gave up an RBI double to the first batter he faced, then got four outs for his 10th save.

McKinney's homer leading off the third gave Toronto a 1-0 lead. Chicago it in the fourth when Yoan Moncada tripled and scored on a groundout by Abreu.

Jonathan Davis led off the Toronto eighth with a single and Guerrero homered over the bullpen and halfway up the bleachers in left field.

Abreu had an RBI double in the bottom of the eighth to trim the deficit before Jansen's two-run shot off lefty Jace Fry in the ninth.

Blue Jays: LHP Clayton Richard (stress reaction, right knee) allowed no runs and no hits in 3 1/3 innings on Saturday in a rehab start for Triple-A Buffalo. He threw 48 pitches (31 strikes), struck out four and walked two.

White Sox: OF Eloy Jimenez (high right ankle sprain) was 7 for 22 (.318) with a homer and RBI in five rehab games with Triple-A Charlotte entering Sunday. No decision has been on when Chicago's top prospect will rejoin the team. “We're just making sure he's healthy,” manager Rick Renteria said. “I'm sure you'll see him with us shortly.”

Blue Jays: RHP Edwin Jackson (0-0, 3.60 ERA) makes his second start for Toronto on Monday afternoon in the opener of a four-game series against Boston. LHP David Price (1-2, 3.75) goes for the Red Sox.

White Sox: They have not named a starter Monday night for the opener of a four-game series at Houston. Chicago was winless in seven games last season against the Astros, who will start RHP Brad Peacock (4-2, 4.01 ERA).