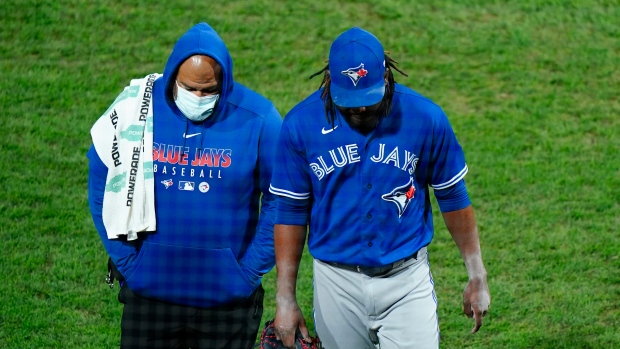 Toronto Blue Jays pitcher Rafael Dolis, right, walks off the field during the sixth inning of the second baseball game in a doubleheader against the Philadelphia Phillies, Friday, Sept. 18, 2020, in Philadelphia. (AP Photo/Matt Slocum)

Zach Eflin struck out nine in a four-hitter and Harper went deep in Philadelphia's 7-0 win in the opener.

The Phillies came back twice in the nightcap.

Rafael Marchan hit his first career homer as a professional, a three-run drive in the fourth that tied it at 5. That came after Mickey Moniak, the 2016 No. 1 overall pick in the amateur draft, lined a single to right for his first hit in the majors.

Marchan didn't go deep in 846 plate appearances over four seasons in the minors, but the 21-year-old Venezuelan catcher connected in just his fifth time up in the big leagues.

Randal Grichuk's sacrifice fly gave the Jays a 6-5 lead in the fifth and Connor Brogdon walked No. 9 batter Danny Jansen on a 3-2 pitch with the bases loaded and two outs, forcing in another run.

Rafael Dolis (2-2) struck out Andrew McCutchen looking with runners on second and third for the second out in the sixth. With a base open, the Blue Jays went after hot-hitting Harper and he delivered.

Harper hit a drive high off the wall in left-centre, slid into the second and got up pumping his fist. Bohm followed with a grounder to second baseman Joe Panik. He beat the throw to Dolis covering first and the ball got away for an error, allowing Harper to score.

Brogdon (1-0) tossed 1 2/3 scoreless innings for his first career win. Hector Neris finished for his fifth save in eight chances. He retired Cavan Biggio on a liner to centre with two runners on to end it.

McCutchen hit a solo homer in the third.

Philadelphia's David Hale made his first start since 2015, allowing two runs and four hits in 3 1/3 innings. JoJo Romero gave up three runs on three hits, recording just one out.

Teoscar Hernandez blasted his 15th homer out to left to cut it to 2-1 in the fourth. Vladimir Guerrero Jr. and Santiago Espinal had RBI singles, and Biggio's two-run single extended the lead to 5-2.

In the opener, Eflin (3-2) threw 92 pitches for his third career shutout and fifth complete game, though this one was seven innings. All of his strikeouts were swinging, including three in the first on curveballs.

“We had a game plan going in of mixing a little more offspeed so that worked out obviously in the first inning and I kind of really just carried that momentum,” Eflin said. “Had good spin on it and I knew it was going to work so I just went with that and made them respect all the pitches I was throwing.”

Harper hit 878 feet of homers in a loss Thursday night against the Mets and connected for his third shot in two games to ignite a five-run fifth against Robbie Ray (2-5).

Toronto has lost five in a row but entered with a 4 1/2-game lead over Seattle for the final wild card in the AL.

The injury-depleted Phillies, missing Nos. 2, 4 and 6 hitters Rhys Hoskins, J.T. Realmuto and Jean Segura, are 26-25. They began the day with a half-game lead over St. Louis for the last wild card in the NL.

Philadelphia hadn't won a doubleheader since Sept. 9, 2012 against Colorado, going 0-12-9 before rallying for the sweep.

Ray gave up five runs and five hits in 4 1/3 innings in his third start for the Blue Jays after being acquired from Arizona before the trade deadline.