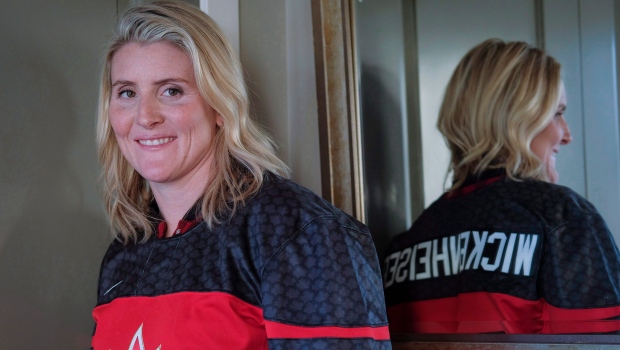 Broadcaster Brian Williams, Olympic leader Tricia Smith and Edward Lennie, the “Father of the Northern Games,” will be inducted as builders.

The Chatham Coloured All-Stars baseball team and Preston Rivulettes hockey team are set to be enshrined as trailblazers.

Wickenheiser is a six-time Olympian, four-time gold medallist, whose unprecedented achievements have helped usher in exponential growth for women's ice hockey in Canada.

Tavares is a three-time National Lacrosse League MVP, who spent his entire career with the Buffalo Bandits and retired the all-time franchise leader in every major offensive category.

McIsaac is a Paralympic pioneer who revolutionized Para-swimming in Canada and around the world. Along with his coaches Wilf and Audrey Strom, McIsaac developed a new system for visually impaired swimmers where coaches would tap him with a foam-tipped rod as a signal to tumble turn, an innovative method that is now compulsory in competition.

He won 28 gold medals over the course of his career.

Williams has enjoyed an extraordinary broadcasting career, spanning five decades with an iconic voice that has resonated with all Canadians.

Lennie was a remarkable community leader and respected Inuvialuit Elder who worked tirelessly during his lifetime to preserve and promote traditional Arctic sports in Canada.

A four-time Olympian who claimed seven world championships and an Olympic medal in rowing, Smith has worked tirelessly to promote the values of sport and to advance opportunities for women and all athletes in Canada and around the world.

Formed in 1932, the Chatham Coloured All-Stars were challenging discriminatory perceptions of Black athletes more than a decade before Jackie Robinson broke the colour barrier in Major League Baseball in 1947. Only playing as a team for seven years, they made a lasting impression during a difficult and hostile time for Black Canadians.

Known as the “Queens of the Ice,” the Preston Rivulettes are celebrated as the most successful women's hockey team in the history of Canadian sport. The Rivulettes won over 95 per cent of the games they played.