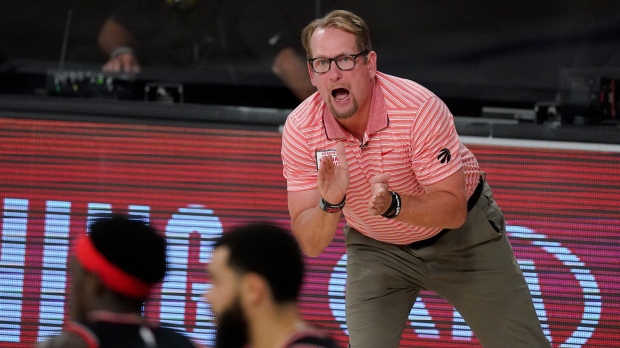 TORONTO -- It was a post-championship season unlike anything Nick Nurse could have predicted.

A No. 2 record in the league despite a slew of injuries and no Kawhi Leonard. An unprecedented four-month layoff due to COVID-19. And then a playoff run in an NBA bubble that felt almost like a post-apocalyptic sci-fi movie.

Woven throughout were messages of racial and social injustice.

Four days after Toronto was eliminated by Boston in the conference semifinals, the Raptors signed their head coach to a multi-year contract extension on Tuesday. And president Masai Ujiri said he was as impressed with what Nurse did off the court as he did on it.

"Our confidence in Nick just continues to grow, and part of that comes from what we've experienced together," Ujiri said in a statement. "The past two seasons have been unlike any other in our team's history -- first, winning our championship, and then navigating a global pandemic and committing long-term to the fight against racism and for social justice.

"Nick has proved that he can coach on the court and lead in life, and we're looking forward to accomplishing great things in the future."

The next step for the Raptors is to sign Ujiri to an extension. Ujiri has one season remaining on his contract and is one of the most coveted executives in the league, but said in April, soon after the league shut down due to the novel coronavirus, that there were more important issues than his contract.

"No, it's not kind of where our minds are right now. It's a crucial time for the world. Those things will come. Last thing on my mind," he said then. "I miss the game ... concerned for the world."

Nurse led the Raptors to their first NBA championship last season, and after Leonard bolted for the Los Angeles Clippers in the off-season, almost no one saw Toronto having a strong season. But Nurse guided the Raptors to a 53-19 record, the second-best mark behind Milwaukee, a franchise-record .736 winning percentage, and a 15-game winning streak, the longest single-season win streak for any Canadian NBA, NHL, MLS, CFL or Major League Baseball team.

For a season that exceeded expectations, the 53-year-old earned NBA coach of the year honours in just his second season as head coach of the club.

Nurse, who was an assistant in Toronto to Dwane Casey for five season, is 111-43 in two seasons as head coach.

The Raptors reached the Eastern Conference semifinals for the fifth consecutive season before losing to the Celtics in Game 7 last Friday in Florida.

Off the court, Nurse, Ujiri and the Raptors were leaders in messaging around social and racial unrest. Nurse and his staff launched a campaign to encourage the 650,000 Americans living in Canada to vote in the Nov. 3 U.S. presidential election. The Raptors arrived at the Walt Disney World bubble in buses with "Black Lives Matter" spelled out in giant block letters.

Nurse boosted Black artist and business owner Nadia Lloyd by purchasing her masks and promoting them in Zoom calls with media. He wore more subtle messaging in his Zoom calls, one day donning an orange WNBA hoodie, the next day wearing a shirt that simply said "VOTE."

The Raptors were narrowly ousted by Boston in a roller-coaster playoff series, and an emotional Nurse said in his post-game media availability that he'd believed he'd have at least another series before having to reminisce about the season.

It might not look anything like the same team next season. Fred VanVleet, Marc Gasol and Serge Ibaka are free agents. Ujiri might consider a total rebuild.

"I'm thinking about it right now. I already miss this team. You know what I mean?" Nurse said after the Game 7 loss. "It was a hell of a two-year run with the core group of these guys, but I didn't think that at all here until the game ended.

"I wasn't thinking about it being over at all. I was really planning on winning this series and getting ready for Miami (and the Eastern Conference Finals) tonight when I got back to the hotel. Now just thinking back again, a hell of a run for this team and some amazing moments and I think everyone should be really proud of them."

Nurse came to the Raptors after coaching in the G League with Rio Grande Valley, where he won a championship in 2013, and Iowa, the 2011 champion.

The native of Iowa is also head coach of Canada's men's basketball team.

This report by The Canadian Press was first published Sept. 15, 2020.