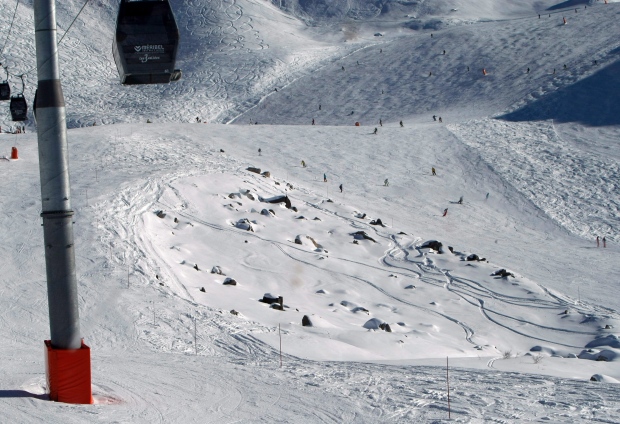 View taken Tuesday Jan. 7, 2014 of French Alps ski resort of Meribel, and the rocks between the slopes where former seven-time Formula One champion Michael Schumacher injured his head during a ski accident.(AP / Claude Paris)

ALBERTVILLE, France -- Two minutes of footage from a camera on Michael Schumacher's ski helmet showed the Formula One great was clearly skiing off a groomed trail when he lost his balance and crashed, leaving him with critical head injuries, investigators said Wednesday.

The investigators said they have ruled out problems with his skis, trail conditions or signage. Although they would not estimate Schumacher's speed, they said it was not considered a significant factor in the Dec. 29 crash at Meribel in the French Alps.

Schumacher, 45, the most successful Formula One driver in history, is still in critical condition in a medically induced coma at a hospital in Grenoble. The impact of the crash split his helmet in two and doctors say the protective gear saved his life.

Prosecutor Patrick Quincy said experts still need to go through the footage image by image, but he said Schumacher landed 9 metres (30 feet) outside the marked trail after falling face down and striking his head on a rock.

Schumacher had been on a family vacation in Meribel, where he owns a chalet.

Skiers and snowboarders continue to use the zone where Schumacher crashed, but say they know they need to be careful.

British tourist Steve Bovill said he always wears a helmet. Speaking from the sunny mountainside, he said, "It was an accident that could have happened to anyone."

Quincy said the investigation, which is standard after any major skiing accident, had no deadline and was intended to discover what happened, not necessarily fix blame. Without specifying, he said authorities plan to interview more witnesses.

Quincy said investigators would call in experts to review the footage from Schumacher's helmet cam.

The cameras, which count snowboarder Shaun White and skier Lindsey Vonn among their promoters, have become increasingly popular in adventure sports.

They generally mount on the outside of the helmet or elsewhere on the body and, as investigators pointed out in the Schumacher case, tend to have a fairly narrow field of vision.

Footage from the devices has been used in investigations before, including the deaths of two Icelandic skydivers killed in Florida last year. In that case, the footage showed that one of the skydivers had tried to save the second just before they both died.