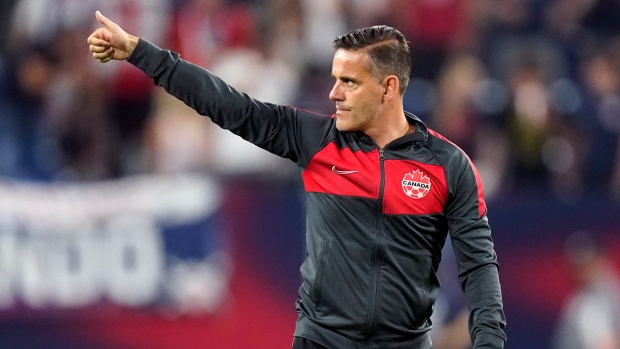 Coach John Herdman paid tribute to Alphonso Davies' wonder-goal but reminded anyone listening that the spectacular strike represents a step - albeit a memorable one - on Canada's World Cup qualifying journey.

Davies, no stranger to turning heads with his speed and skill, reached a new level Wednesday with the winning goal in a 4-1 World Cup qualifying victory over Panama at Toronto's BMO Field.

Coming out of nowhere, the 20-year-old Bayern Munich star sprinted up the sidelines to beat Panama defender Harold Escobar, who was attempting to shepherd the ball out of play. A speeding Davies artfully retrieved the ball just before it went out, using his trailing foot to keep it and push it ahead so he could keep on the move. He then raced towards the Panama penalty box where, using teammate Tajon Buchanan as a decoy, he danced around defender Fidel Escobar and fired a shot into the corner that left goalkeeper Luis Mejia rooted to the spot.

“The reaction's been what it should have been,” Herdman said Friday when asked about the goal. “That goal scored by (Lionel) Messi or (Cristiano) Ronaldo, any top-, top-, top-, top-class player around the world, would have went viral. It's a special goal. I think it will go down in Canadian folklore.

“But at the same time, it will mean nothing if we don't qualify for the World Cup. It will just be one of those moments. So while we can all get excited about what we achieved, I'm back in the harsh reality now of being down in the basement (at home) and getting ready to go again.”

Herdman revealed he had just spent an hour on the phone comparing notes with U.S. coach Gregg Berhalter.

Come March, when each team has played 14 games, the top three will book their ticket to Qatar 2022. The fourth-place team will take part in an intercontinental playoff to see who joins them from the region covering North and Central America and the Caribbean.

Herdman said the entire squad had a good night following the Panama win. Some players met with hip-hop star Drake, an admirer of Davies, at the team hotel.

“The excitement was brilliant â€¦ That night will be remembered for those (26,622) fans that were there,” said Herdman. “And Alphonso Davies is special. We know that. But special players have to show up in big moments and he showed up with something that was just a treat for these fans.”

Herdman said Davies was “over the moon” to be able to play at home next month.

“And he deserves it. I mean he's a Champions League winner. During that COVID period, he was a real shining light for our sport with his achievements. He kept people motivated and going. And for him to be able to celebrate being on the field with a lot of people that helped him get there, I think that's a big driver for him. He's passionate about the place he grew up and I know he'll use that, alongside Sam Adekugbe (who grew up in Calgary).”

Davies posted a video on social media showing highlights of the Panama game to a soundtrack of Drake (“Champagne Poetry” and “Fair Trade,” featuring Travis Scott) and the TV call of his goal, courtesy of OneSoccer's Gareth Wheeler (“Davies takes it away, two versus one. Davies and Buchanan. Alphonso Davies, keeps it himself. Gooooal. Alphonso Davies. Are you kidding me? An individual piece of brilliance.”)

The song “Fair Trade” includes a reference to “Southside,” which works nicely with the rabid Voyageurs soccer supporters group that filled the south stand of BMO Field.

Herdman has had first-hand experience of the Edmonton crowd, which filled Commonwealth Stadium when he was in charge of the Canadian women's team at the 2015 World Cup.

“Even if you're not football fans, to get the chance to see Davies do what he does on a football field. I mean, this is a generational thing. It's something not to be missed,” he said.

Canadian wingback Richie Laryea says the entire team marvelled at Davies' heroics, knowing you could probably count on one hand and have a few fingers left over in coming up with players who could score such a goal.

“This kid's something else. He's from a different planet, sometimes it feels like, with the level he plays at. You think 'Oh yeah, he's good. He'll just continue at this level and be a really good player.' And you come back to camp and it's like this guy's pushed it up another notch. It's crazy ... The sky's the limit for this guy. He can do whatever he wants because that's how good he is.”