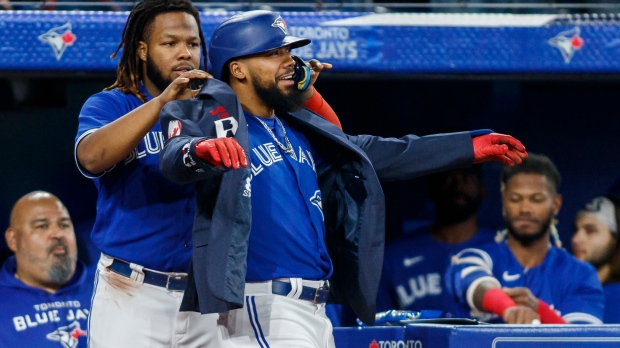 TORONTO - Teoscar Hernandez had two home runs, one a solo shot and the other a two-run blast, as the Toronto Blue Jays downed the Boston Red Sox 6-3 on Sunday.

Toronto swept the three-game series to wrap their final homestand of the regular season. The win helped the Blue Jays tighten their grasp on home-field advantage in the first round of the American League playoffs with Seattle and Tampa Bay also vying for top spot in the wild-card race.

Whit Merrifield had a solo home run and added an RBI single for Toronto (90-69). George Springer drove in a run with a fielder's choice in the seventh inning.

Starting pitcher Kevin Gausman left the game after three innings with a cut on the middle finger of his throwing hand. He allowed two runs on four hits, striking out four, before giving way to Zach Pop (4-0) of Brampton, Ont.

It was the first time in Major League Baseball history that the win and the save in a game were earned by Canadians on home soil.

Bobby Dalbec supplied all of the offence for the Red Sox (75-84) with a solo home run and an RBI single that drove in two runs.

Dalbec got the Red Sox on the board in the second inning, stroking a single to centre field to score J.D. Martinez and Abraham Almonte. Those were the first runs Boston had scored in the three-game series after losing to the Blue Jays 9-0 and 10-0 on Friday and Saturday, respectively.

Hernandez replied for Toronto in the bottom of the second, smashing the first pitch he saw from Wacha 430 feet into the second deck at Rogers Centre. His 24th homer of the season had an exit velocity of 112.7 m.p.h.

Merrifield tied it up in the next inning with his solo shot. Like Hernandez's first home run, his bomb went into the second deck, flying 404 feet into the stands above the Blue Jays' bullpen to the delight of the 43,877 in attendance.

Hernandez handed Toronto its first lead of the game in the fourth, putting an 84.2 m.p.h. change-up from Wacha into the foul netting in left field. That brought home Vladimir Guerrero Jr., who had led off the inning with a walk, for a 4-2 lead.

The Blue Jays scored again in the same inning when Merrifield's single gave Danny Jansen ample time to run home from second. Although Merrifield advanced to third on the throw, Toronto was limited to three runs on the inning.

Dalbec continued to be the most productive member of the Red Sox lineup, despite hitting eighth in Boston's batting order, when he launched a no-doubter off Bass to cut Toronto's lead to 5-3 in the seventh inning.

Springer re-established Toronto's three-run lead in the bottom of the inning. His infield dribbler gave Merrifield enough time to slide in under the tag from catcher Connor Wong.

ON DECK - Jose Berrios (11-7) will take the mound as the Blue Jays travel to Baltimore for their final series of the regular season. Dean Kremer (8-6) is scheduled to pitch in the opener of the three-game series.