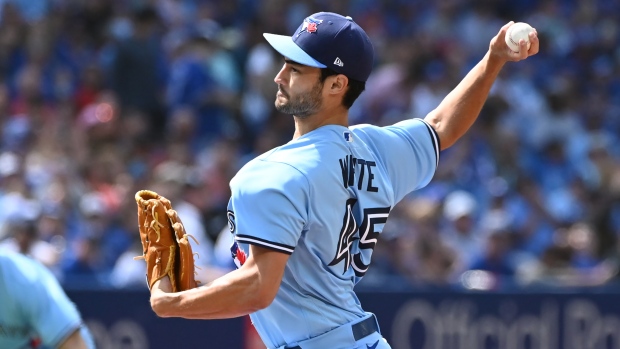 TORONTO - One of the questions for the Toronto Blue Jays emerging from the trade deadline earlier this month was whether they strengthened their faulty bullpen enough to be a serious contender.

Relievers Zach Pop, Adam Cimber, Anthony Bass, Yimi Garcia and closer Jordan Romano were a big reason why the Blue Jays (61-51) halted a three-game losing streak with a come-from-behind 2-1 win against the Cleveland Guardians (60-53) on Saturday.

With Cleveland in front 1-0, Toronto starter Mitch White found himself in trouble with two out in the fourth inning. Interim Toronto manager John Schneider then handed the game to his relievers. They shut out the visitors to allow Matt Chapman and Teoscar Hernandez to smack solo homers to lead off the fifth and seventh innings, respectively.

“Zach came in to clean up my mess,” White said. “I don't mind passing the torch to them. They were awesome.”

Bass and Pop were two arms added to the Blue Jays' bullpen at the trade deadline. Bass (3-3) picked up the win for his clean seventh inning.

“You can't say enough about the job they did from Pop to Cimber to Bass to Yimi,” Schneider said. “They all stepped up.

“They've been really, really good for a while now. So it lined up well after Mitch and just a credit to those guys. They were all pretty much nails.”

The bullpen has come shining through for the past two games with a combined 9 â…“ shutout innings.

Meanwhile, Romano earned his 26th save with a four-out appearance on Saturday, the fourth time he's pitched more than an inning since Schneider replaced Charlie Montoyo.

“(Romano's) shown that he can do it,” Schneider said. “I trust him in any spot, really.”

Cleveland opened with a run in the first inning.

Steven Kwan led off with a walk and advanced to second when Canadian Josh Naylor earned a two-out free pass. Andres Gimenez knocked in Kwan with a single to centre field.

Toronto slugger Vladimir Guerrero Jr. extended his hit streak to a career-high 22 games with a first-inning double. But for the most part, the Blue Jays continued to be stymied by Cleveland's pitching.

Finally, Chapman led off the fifth inning with his blast to left centre to tie the game and end a streak of 16 scoreless innings for Toronto.

Chapman's game-tying homer also tied him for the team lead with Guerrero at 23.

“It's been a difficult time,” Hernandez said. “We've been facing a lot of good pitchers.”

Blue Jays centrefielder Raimel Tapia made two brilliant catches. With a runner on first and nobody out, the left-handed outfielder made a diving catch to his left on a line drive from Amed Rosario in the opening inning.

In the fifth inning, Tapia made a running catch over his right shoulder on the warning track in left centre off the bat of Jose Ramirez to end the inning with runners on first and second.

Tapia also was thrown out at home plate, trying to score on a single from second base to end the seventh inning.

After a rough first inning, White retired eight in a row before a fourth-inning walk to Gimenez.

Ross Stripling rejoined the Blue Jays on Saturday after his successful five-inning shutout rehab start for Triple-A Buffalo on Friday. He could find a spot in the rotation as early as Wednesday if the Blue Jays decide to give the struggling Jose Berrios an extra day of rest.

Toronto righty Kevin Gausman (8-8) will face Cleveland's Shane Bieber (7-6) in the series finale on Sunday. The Blue Jays continue their six-game homestand with the first of three against the Baltimore Orioles on Monday.

This report by The Canadian Press was first published Aug. 13, 2022