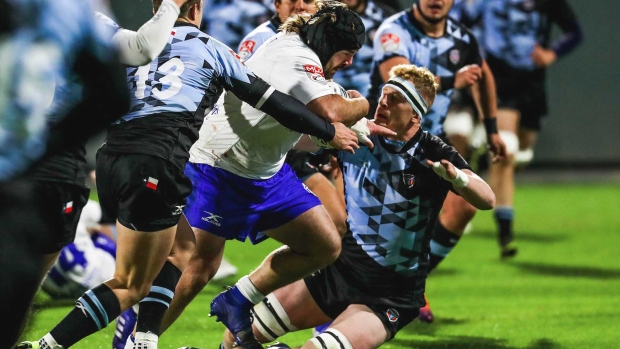 Hard-running prop Morgan Mitchell has been a force on the field for the expansion Toronto Arrows this season.

The New Zealander's rise in rugby is all the more remarkable given he was deaf up until several years ago when a cochlear implant restored his hearing.

Mitchell, 25, was born with a hearing impairment. He had some hearing thanks to hearing aids but his condition got worse. The five-foot-nine 251-pounder had the cochlear implant surgery three years ago after losing his hearing completely.

“My eardrum was pretty much gone ... I could not hear anything and I was just lip-reading,” he said. “Life got a bit tough.

“If I didn't have my parents, I wouldn't have been here. They pushed me to get the cochlear implant. Now I'm loving it.”

On Friday, Mitchell and the Arrows (3-3-0) visit fellow expansion side Rugby United New York (4-1-0). It's the home opener for RUNY at MCU Park in the Coney Island section of Brooklyn. The waterfront stadium is also home to the Brooklyn Cyclones, a New York Mets farm team in the New York-Penn League.

Toronto is coming off a 27-20 comeback victory at the San Diego Legion while RUNY won 47-21 at the Utah Warriors last time out.

Growing up, Mitchell's rugby talent earned him an invitation to a New Zealand under-17 training camp. But his career appeared over when doctors told him he would have to give up the sport if he had the cochlear implant.

His surgeon disagreed, saying he could place the device a little deeper. Mitchell wears a scrum cap to help protect the external portion of the device.

“I took his advice and look where I am now? Happy and just enjoying life,” he said.

The implant is an electronic medical device that does the work of damaged parts of the inner ear (cochlea) to provide sound signals to the brain. It consists of an externally worn microphone and speech processor/internal electrode array. The microphone picks up sounds near the ear level and sends it to the speech processor.

It took several months to get used to the implant and have it working at peak levels.

A former flanker, Mitchell heard of the Arrows opportunity via his agent. After five years with the Southland Stags in New Zealand, his contract was expiring and he wanted a new challenge - and to hopefully learn new skills.

Mitchell is diplomatic about the level of rugby in MLR.

“There's a couple of things they need to work on but it's a start. It's got massive potential,” he said.

While Mitchell admits the severity of the Canadian winter is something new, he is relishing life in his adopted home.

“I'm absolutely loving the big city life as I'm from a wee farm town back home in New Zealand. Everyone's been welcoming, it's made life easy.”

Mitchell comes from Gore, located near the tip of New Zealand's South Island.

Toronto Arrows prop Morgan Mitchell walks out with teammates ahead of a game against the Seattle Seawolves in Seattle on February 17, 2019. THE CANADIAN PRESS/HO - Mark Janzen