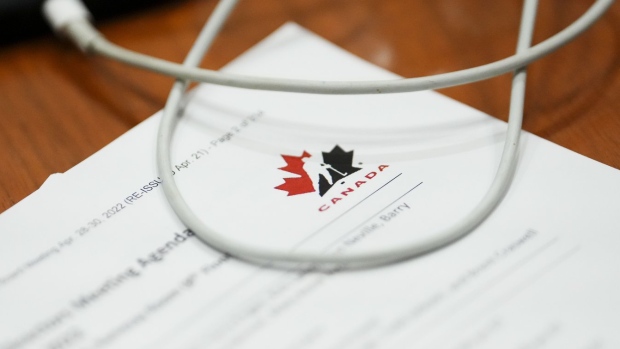 A Hockey Canada document is review by a member of Parliament during a House of Commons Committee on Canadian Heritage looking into safe sport in Canada on Parliament Hill in Ottawa on Tuesday, Oct. 4, 2022. THE CANADIAN PRESS/Sean Kilpatrick

MONTREAL - Hockey Quebec says it has lost confidence in Hockey Canada and will not transfer funds to the national organization, while a well-known Canadian brand extended its sponsorship boycott.

Hockey Quebec confirmed to The Canadian Press that its board of directors adopted a motion Tuesday night stating it does not believe Hockey Canada's current structure can change hockey culture. The resolution was first reported by La Presse.

The provincial hockey body also decided to keep the portion of registration fees normally handed over to the national organization, which amounts to $3 per sign-up.

The company, which first suspended its sponsorship in June, says it will continue to fund national women's and para hockey programs, as well as youth hockey.

Media reports said Scotiabank followed suit Wednesday night, announcing in a statement that it will extend its pause of sponsoring the organization through the 2022-2023 season, including the world junior tournament.

“In our open letter in June, we publicly called on Hockey Canada to hold the game to a higher standard and we are disappointed with the lack of progress to date,” the bank said.

“From Hockey Canada, we expect a tangible commitment to transparency with Canadians, strong leadership, accountability with their stakeholders and the hockey community, and improved safety both on and off the ice. Our position hasn't wavered: the time for change is long overdue.”

The Ontario Hockey Federation, the largest of Canada's 13 provincial and territorial hockey associations, has asked Hockey Canada a second time to not collect the $3 participant assessment fee from its members for the 2022-23 season.

“It is our understanding now that this request was never directed to the board before his departure,” the OHF said in a statement.

Brind'Amour resigned from his position Aug. 6. Andrea Skinner took over as interim board chair.

The Canadian Press reached out to provincial hockey associations in B.C., Alberta, Saskatchewan and Manitoba for reaction to Hockey Quebec's resolution. B.C. Hockey said it would “continue to monitor” the situation, while Hockey Saskatchewan responded with a “no comment” reply. Hockey Alberta and Hockey Manitoba did not respond.

Hockey Canada continues to vigorously defend its leadership amid criticism over the handling of alleged sexual assaults and the way money was paid out in lawsuits.

Two recent allegations involve players from the 2018 and 2003 Canadian junior men's teams. Those allegations have not been tested in court.

Brind'Amour and Skinner were grilled Tuesday by members of Parliament on why wholesale changes haven't been made to Hockey Canada's leadership. Both continued to back chief executive officer and president Scott Smith.

Hockey Quebec's move was applauded by Sport Minister Pascale St-Onge, who has called for a leadership change at Hockey Canada.

“It also sends the message to the leaders at the organization that are holding on to their jobs that Hockey Canada doesn't belong to them,” St-Onge told reporters in Ottawa. “It also belongs to their members, and they want change. They want a change of culture and they want to fight against sexual violence.

“Since the leaders of Hockey Canada are holding on to their jobs, the voting members need to clean the house.”

Prime Minister Justin Trudeau said it “boggles the mind that Hockey Canada is continuing to dig in its heels” as more Canadians lose faith in it.

“It's no surprise that provincial organizations are questioning whether or not they want to continue supporting an organization that doesn't understand how serious a situation it has contributed to causing,” Trudeau said Wednesday.

Hockey Canada has been under fire since May when it was revealed it settled a lawsuit with a woman who alleged she was sexually assaulted by eight players from the 2018 junior men's hockey team at a June gala event in London, Ont., that year.

The allegation is the subject of three investigations being conducted by London police, the National Hockey League and Hockey Canada.

“Right now, we need to put pressure on the organization,” Nater said Wednesday before entering his party's weekly caucus meeting.

“Put pressure on the 13 voting members to ensure that there's a board in place that's going to make those meaningful changes at the top.”

Conservative MP Kevin Waugh added Hockey Canada has the money to weather the current scandal for years to come.

“It will be up to the sponsors, I believe now,” Waugh said.

“This is such a series of bad decisions and bad handling, in my view, that I'm not sure if Hockey Canada hasn't already crossed that line, again, given some of the public sentiment and even membership sentiment that I'm hearing at the grassroots level,” Mayenknecht told The Canadian Press.

“I'm not so sure that they can fully regain the trust without doing a lot more than they already have.”

It was revealed in July that Hockey Canada paid out $7.6 million in nine settlements related to sexual assault and sexual abuse claims since 1989.

The figure didn't include this year's payout of an undisclosed sum to the London plaintiff, who had sued for more than $3.5 million.

Since Hockey Canada's settlement became public in the spring, Halifax police were asked to investigate an alleged sexual assault by members of the 2003 junior men's team.

Brind'Amour stated Tuesday that Smith has “the necessary qualities to do something positive for the organization.” Skinner, meanwhile, said culture change can happen while maintaining leadership stability.

“I think there's two things going on there: one, there is a level of protectionism. Wanting to protect the sport that they believe in, that they really strongly, truly value, that there is something important about protecting that sport,” Misener said. “I think that that's happening on one hand and why they want to stay in their positions.

“Two, I think there's a real misunderstanding of what culture shifting (and) culture change requires.”

- With files from Frederic Daigle in Montreal, Stephanie Taylor in Ottawa and Abdulhamid Ibrahim in Toronto.