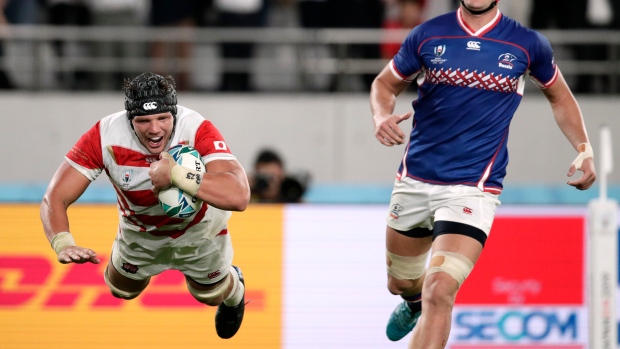 Japan's Pieter Labuschagne, left, is airborne as he scores a try as Russia's Bogdan Fedotko, right, watches during the Rugby World Cup Pool A game at Tokyo Stadium between Russia and Japan in Tokyo, Japan, Friday, Sept. 20, 2019. (AP Photo/Jae Hong)

TOKYO - Kotaro Matsushima's first hat trick for Japan proved a vital one, since it helped the Rugby World Cup host overcome an error-strewn start to beat unfancied Russia 30-10 in the tournament's opening match on Friday.

Even though he also became just the third player from a tier two rugby nation to score three in a World Cup match, he deflected the praise.

“The job was from the forwards, so I appreciate the work from the guys,” Matsushima said.

His coach Jamie Joseph agreed, joking that finishers get too much praise.

“That's what the Ferraris on the sides get,” Joseph said, smiling. “But the forwards do a lot of the hard work.”

The tournament is being hosted in Asia for the first time and the players felt it - even more so after a tradition-packed opening ceremony drawing on Japan's cultural heritage and its path toward embracing rugby.

“We made a lot of unforced errors. Our kicking game was pretty poor tonight,” Joseph said. “The first mistake was from kickoff and all of a sudden we were under pressure. ... We sucked it up and got out of trouble.”

The Tokyo Stadium crowd was stunned after four minutes as fullback William Tupou missed a routine catch under no pressure to allow left winger Kirill Golosnitskiy an easy converted try. Another first: The quickest opening-match try in tournament history.

“There was a bit of magic with us but it wasn't for long enough,” Russia coach Lyn Jones said. “It's playing at an intensity and focus the players just aren't used to.”

Pockets of Russian fans - including a handful dressed as Soviet-era astronauts - were louder than the home crowd watching in silent anxiety as the home team dropped high balls or fumbled them.

It could have been even worse but this was not New Zealand attacking them. After Japan again carelessly gave the ball away, Russia centre Vladimir Ostroushko burst through midfield but kicked ahead aimlessly instead of waiting for support.

Matsushima thought he had a second try five minutes from halftime, but fullback Vasily Artemyev made a brilliant captain's tackle and video review showed Matsushima spilling the ball inches above the ground. Referee Nigel Owens ruled it out, drawing jeers.

Moments from the interval, Matsushima made it count as Japan finally established a period of sustained pressure and centre Ryoto Nakamura fed him an overlap pass for an easy converted score.

After Tamura's penalty settled nerves in the second half, the anxiety lifted when flanker Pieter Labuschagne stripped Andrei Ostrikov before scampering 40 metres over for an unconverted try.

Russia battled away, still, and flyhalf Yuri Kushnarev's penalty cut the deficit with 20 minutes left after Japan infringed at the ruck.

“This in a way was their grand final as they came into the tournament as underdog and written off,” Joseph said. “They really gave it to us, so you have to take your hats off to them.”

After Tamura found his range, at last, slotting over a 45-meter penalty, Matsushima finished Russian resistance off by breaking a weak tackle as he overlapped again down the right.

For Russia it was a learning experience.

“When we did have the ball they took our time away, our boys are just not used to that. Tier one rugby isn't another level, it's another sport,” Jones said. “I'm very proud of the way our players stuck in there and gave everything they had for their nation.”

Russia has little time to recover, with Samoa coming up on Tuesday.

Japan's next Pool A match is against Ireland next Saturday, a brutal swing which takes Japan from facing the world's 20th-ranked side to the current No. 1.

“No one gives us a shot,” Joseph said.