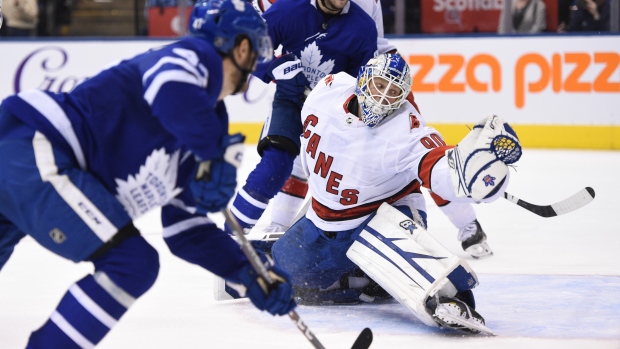 TORONTO - Emergency backup goalie David Ayres made eight saves in relief and Warren Foegele scored twice as Carolina picked up an improbable 6-3 victory over the Toronto Maple Leafs on Saturday after the Hurricanes lost netminders James Reimer and Petr Mrazek to injury.

Martin Necas, with a goal and an assist, Lucas Wallmark, Nino Niederreiter and Sebastian Aho also scored for Carolina (35-22-4).

Alexander Kerfoot, Pierre Engvall and John Tavares replied for Toronto (32-23-8), which beat the Hurricanes 8-6 at home in another wild affair at Scotiabank Arena on Dec. 23. Kasperi Kapanen and Tyson Barrie picked up two assists each for the Leafs, while Frederik Andersen made 43 saves.

Reimer started for the Hurricanes against his former team, but left with a lower-body injury in the first period after being bowled over in his crease. He was replaced by Mrazek, who made 31 saves in Friday's 5-2 home loss to the New York Rangers. But Carolina's second option was hurt in the middle period after a thunderous collision with Leafs winger Kyle Clifford as both players raced for the puck along the sideboards.

That forced Ayres - a 42-year-old ex-junior goalie - into action for the rest of the game between two clubs battling for playoff positioning in the Eastern Conference.

After a bizarre second period that saw Carolina score four times, give up two goals, lose Mrazek, and have Ayres pressed into action, the Hurricanes made it 5-3 just 53 seconds into the third after jumping on a turnover and beating Andersen in tight.

Necas then made it 6-3 at 3:44 when he picked up a loose puck to finish off a chaotic sequence as boos rained down.

The jeers continued on a Leafs power play later in the period and got louder as the period wore on, with some fans chanting “Let's Go Raptors!” as the final minutes ticked down on an embarassing performance from the home side.

Carolina trailed 1-0 after the first, but tied it at 5:46 of the second when Wallmark scored off a scramble in front of Andersen. Niederrieter then blasted a one-timer on a power play at 9:43 before Foegele made it 3-1 at 10:49.

Mrazek made 14 saves in relief of Reimer, but left the game 30 seconds after Foegele's first goal. The Czech netminder lay on the ice for a few minutes before leaving.

And after a delay, Ayres emerged fro the Hurricanes locker room sporting No. 90.

He got a some warmup shots from his new teammates before getting thrown into the fray.

Aho made it 4-1 with Clifford in the box for charging at 13:17, but Tavares scored on the first shot against Ayres through the five-hole 19 seconds later.

Engvall buried a loose puck on Toronto's next shot against Ayres at 15:10.

The Leafs got a power play after that - fans at Scotiabank Arena screamed “Shoot!” almost every time a Toronto player had the puck anywhere the Carolina goal - but the Hurricanes didn't allow anything through.

Clifford then fought Joel Edmundson in response to the Mrazek collision, much to the delight of the buzzing crowd.

Ayres made his first save late in the second on Auston Matthews as Carolina led 4-3 through a wild 40 minutes.

The Leafs were coming off Thursday's convincing 4-0 victory over Pittsburgh at Scotiabank Arena in the back end of a home-and-home that started with Tuesday's 5-2 loss to the Penguins - a second consecutive lacklustre defeat that had fans and media calling out Toronto's work ethic and level of urgency in the middle of a tight race.

Before that icebreaker, the opening period had already provided plenty of action and controversy.

Carolina's Andrei Svechnikov nearly put the visitors in front after 40 seconds, but Andersen got his toe on the puck before Denis Malgin cleared it off the goal line.

Zach Hyman then shoved Hurricanes defenceman Jaccob Slavin into Reimer to earn himself an interference penalty. The Carolina goalie, who played for Toronto from 2010 to 2016, stayed in the crease after being looked at by a trainer, but left shortly thereafter with a lower-body injury in favour of Mrazek.

Coming off his second shutout of the season Thursday, Andersen was forced to make the game's first nine stops before Toronto directed its first shot on target.

Leafs defenceman Tyson Barrie was hurt with six minutes gone when Svechnikov took him hard into the end boards. The defenceman skated right to the locker room favouring his right shoulder, but was back on the bench to start the second.

The Leafs went on the power play with Svechnikov off for boarding, but Carolina had the best chance as Andersen robbed Sebastian Aho on the doorstep.

Jason Spezza lost the puck in front of Toronto's goal later in the period and had Andersen scrambling to keep things scoreless before Hyman was stopped on a break by Mrazek, but he could do nothing on Kerfoot's effort late in the period.