'I'd be lying if I said I wasn't disappointed': Leafs scratch Spezza for opener 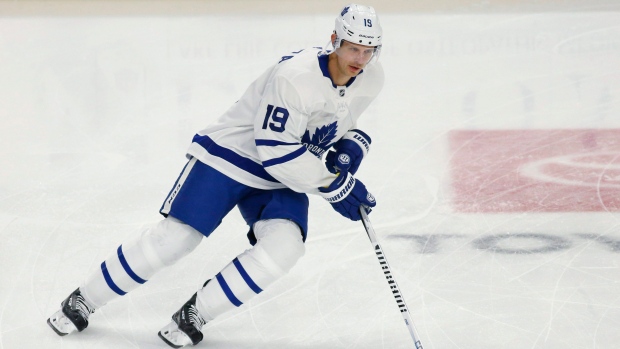 Toronto Maple Leafs forward Jason Spezza warms up for the NHL hockey team's preseason game against the Buffalo Sabres, Saturday, Sept. 21, 2019, in Buffalo N.Y. Spezza will be a healthy scratch for the season opener tonight against the visiting Ottawa Senators. THE CANADIAN PRESS/AP-Jeffrey T. Barnes

TORONTO - Jason Spezza's regular-season debut with the Toronto Maple Leafs will have to wait.

The veteran forward was a healthy scratch when his new team hosted the Ottawa Senators in the curtain-raiser of the 2019-20 NHL campaign on Wednesday night.

“You definitely want to be part of these games,” Spezza said after the morning skate. “They give you things to get excited about.

“I'd be lying if I said I wasn't disappointed, but I'm also a professional.”

Leafs head coach Mike Babcock said the 36-year-old Spezza - a former No. 1 centre - has yet to fully grasp his new defensive role, one that includes killing penalties.

“This buys him more time, more reps,” said Babcock, who added Spezza will play Friday when Toronto visits the Columbus Blue Jackets. “He's been getting lots of reps and extra on it and we're trying to stay with that the best we can.”

Babcock said Tuesday he was most concerned about the penalty-killing unit on a roster that will feature 13 new faces compared to last season's opener.

“We've got a lot new people,” Babcock said 24 hours before making his lineup for the opener. “Penalty killing's a huge part of the game. You can play great and suddenly it's in your net.

“That's our biggest focus in making sure we're up to speed.”

Leafs general manager Kyle Dubas, who signed Spezza on July 1, said he and Babcock are “100 per cent on the same page” when it comes to the veteran player's usage and deployment.

“I know it's disappointing for Jason,” Dubas said during a first-intermission press conference. “I totally understand that. I get that it's the first game, I get why it is a discussion.”

Spezza said it's up to him to earn Babcock's trust.

“I have to get up to speed with what he wants,” the Toronto native said. “For me, it's just working every day and being prepared.”

Spezza added nothing's been lost in translation in his conversations with the coach.

A veteran of 236 NHL games with three teams, Nick Shore played on the fourth line with Frederik Gauthier and rookie Dmytro Timashov against Ottawa.

“He can win faceoffs, he can penalty kill, he stands in the right spots,” Babcock said of Shore. “He's done it before in the league ... just does his job.”

Spezza, who played 10 seasons with the Senators from 2002 to 2014 before being traded to the Dallas Stars, hasn't killed penalties since his time in Ottawa.

“Yeah, there is things to learn,” he said. “I haven't killed a lot the last few years. Prior to that I killed more, but my role's changing. With changing you have to learn, you have to adapt and you have to get better.

“I'm going to do all those things and make sure when I get in I'm ready.”

“You want to play to open the season, there's no doubt about that,” Spezza said. “The competitor in you wants to be in every night, but you play the hand that you're dealt.

“I'm just going to work and be ready. When you get in you make sure you play well.”