'I didn't expect all of this': Ayres donates goalie stick to Hockey Hall of Fame

Between work, coaching kids and suiting up as the Toronto Maple Leafs' practice goalie, the 42-year-old Zamboni driver hadn't been on the ice with friends in a few months.

Now a piece of equipment he used in that game of shinny - incredibly, improbably - resides in the Hockey Hall of Fame.

Ayres, the emergency backup goalie who shot to stardom when he was pressed into service after the Carolina Hurricanes lost both their netminders to injury against the Leafs last Saturday, donated his game-used stick from that stunning 6-3 victory to the Hockey Hall of Fame on Friday.

“I didn't expect all of this ... that's for sure,” Ayres said at a ceremony in Toronto. “I expected to go on the ice and play a couple of minutes and get off and maybe do one or two interviews.”

That's not even close to what happened. 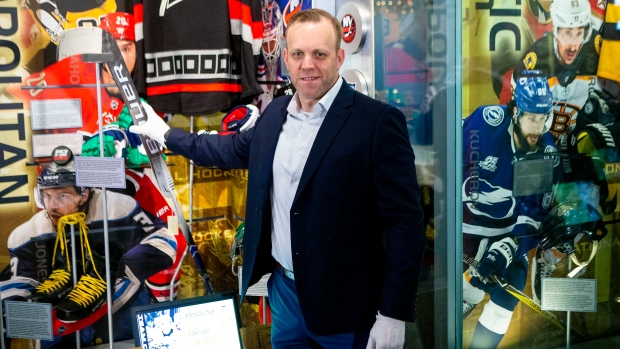 Ayres has shot to international stardom since becoming the oldest goalie in NHL history to win his regular-season debut, and the first emergency backup to register a victory.

The resident of Bowmanville, Ont., has been interviewed dozens of times, appeared on “Today” and “The Late Show with Stephen Colbert” in the United States, and was a guest of the Hurricanes along with his wife at their game Tuesday in Raleigh, N.C.

“You don't realize how much adrenaline pulses through your veins when you're doing stuff like this,” said Sarah Ayres, who became a Twitter sensation with a colourful post after David entered the game.

Her husband has met NHL commissioner Gary Bettman in New York, spoke on the phone with “Late Late Show” host James Corden and got a call from Ontario Premier Doug Ford.

“Haven't really had a chance to have it all sink in,” said David Ayres, who like every emergency backup goalie is available to either team on a nightly basis. “But the reception from everybody and how positive of a story this has become is fantastic.”

Ayres, who underwent a kidney transplant in the mid-2000s, allowed goals on the Leafs' first two shots, but stopped the next eight, including one at the buzzer that he snagged with his glove to put an exclamation mark on a moment the hockey world won't soon forget.

“There's so much excitement and then all of a sudden the crowd sees you,” he said of stepping on the ice last Saturday at Scotiabank Arena midway through the second period. “Your legs lock up and the nerves go crazy.” 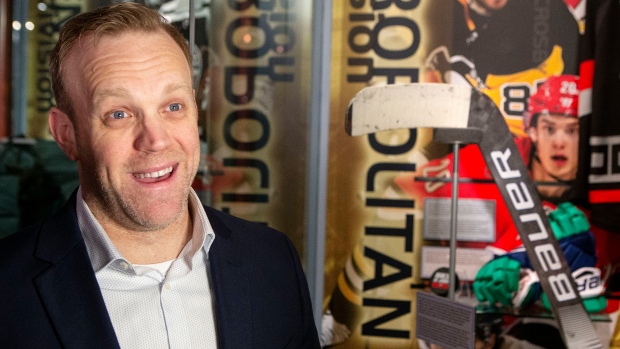 Operations manager at the former Maple Leaf Gardens, now known as Mattamy Athletic Centre, Ayres has also heard the criticism that there's no way a billion-dollar business like the NHL should be relying on an amateur in his 40s in the middle of a playoff race.

The issue has become polarizing. One side suggests two goalies getting injured in the same game is incredibly rare - although a similar situation popped up two years ago with the Chicago Blackhawks - while the other argues the integrity of the league could be in jeopardy.

An idea floated is ensuring a member of each team's backroom staff can suit up in a pinch or that there's an across-the-board standard for emergency backup goalies - known as an “EBUG” - but there's likely no easy solution.

“I understand it just because of this situation,” said Ayres, who has practised with the Leafs' organization for eight years. “I also know and I've talked to a bunch of the other emergency goalies and I know how much they're on the ice with the team.

“I don't think people understand the behind the scenes.”

Ayres, who is not employed by Maple Leaf Sports & Entertainment, is in great shape for his age and enjoys giving starter Frederik Andersen and backup Jack Campbell a breather during some drills.

The netminder's hockey resume, however, is extremely thin. His last competitive action before skating out under the bright lights came in Allan Cup Hockey - a high-level men's league - back in 2014 when he went 0-8 with a .777 save percentage with Norwood.

What would Florida, battling Toronto for a playoff spot, or Carolina, in a post-season fight of its own, with millions of dollars on the line have thought if the Leafs shelled an EBUG they see on a regular basis and know personally?

It didn't happen - Toronto was soundly embarrassed, not the NHL, in a game dominated by the Hurricanes - but the optics could have been disastrous.

The league's general managers are set to meet in Florida next week, and the emergency backup goalie issue will be on the agenda.

“People think they pulled me off the Zamboni, threw equipment on me and threw me out there and said, 'Good luck.' That wasn't the case,” explained Ayres, who's also dressed as an EBUG in the American Hockey League. “I understand where they're coming from, but I'd love to see somebody else in the league get the same opportunity.”

Speaking of opportunity, he's hoping to use his new-found fame, however long it lasts, to further organ donation awareness. 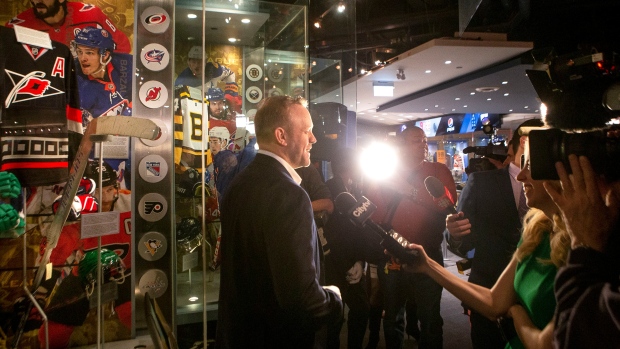 Ayres, who received that kidney transplant from his mother in his late 20s, asked the Hurricanes to give the proceeds of T-shirts with his name on the back to a Carolina foundation, while hospitals in places like Buffalo and Houston have reached out.

He'll also be at the Saskatoon Blades' game next Friday in support of the Western Hockey League team's organ donation event.

“Just because you have a transplant, it doesn't mean you need to give up,” said Ayres, who will be back as the emergency backup Saturday when the Leafs host the Vancouver Canucks. “Put in the hard work and keep going.”

The native of Whitby, Ont., had never been to the Hockey Hall of Fame's current location - it has been across from Union Station in downtown Toronto since 1993 - before Friday.

He'll be back with Sarah and their three kids, who Ayres adopted after the couple married, more frequently now that his name sits alongside the game's greats.

“I've definitely got to come and visit,” he said. “Probably stick around and see a few things I've never seen.”

And look at one he knows pretty well.