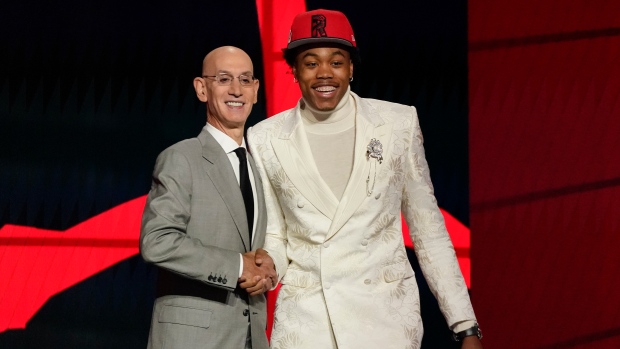 Scottie Barnes, right, poses for a photo with NBA Commissioner Adam Silver after being selected fourth overall by the Toronto Raptors during the first round of the NBA basketball draft, Thursday, July 29, 2021, in New York. (AP Photo/Corey Sipkin)

Scottie Barnes believes he can be one of the best players in the NBA - and he's planning to become that icon by working hard for the Toronto Raptors.

The Raptors selected Barnes, a 19-year-old Florida State forward, with the No. 4 pick in the draft Thursday.

Barnes said he had great meetings with Toronto heading into the draft, but didn't get a sense the team would choose him.

“Once they called my name, it was really just a huge rush of excitement,” he told reporters on a video call. “When I went on my workout day, I really had a good workout, being able to talk to people on their staff, really develop a relationship.”

The six-foot-nine, 225-pound native of West Palm Beach, Fla., averaged 10.3 points and 4.1 assists for the Seminoles last season and was named the Atlantic Coast Conference freshman of the year.

“I don't back down for nobody. It's about how tough you are, what you're willing to do. I'm willing to do those things,” said Barnes, clad in a brand-new red Raptors had, a white turtle neck and a shimmering white brocade suit. “I'm pretty tough on the floor, I have a grit when I'm on the floor. I don't get bullied.”

Toronto's latest addition does have room for improvement, though, after going 11 for 40 on three-point shots and shooting 62 per cent from the line last season.

Barnes feels his shooting has improved “tremendously” since the college campaign wrapped, but said he's willing to keep working on it as he transitions into the NBA.

“If they feel like they need to fix something in it, I'm willing to work with them to try to fix whatever it needs,” he said. “I'm willing to do whatever it takes to try to be the best player I can be, being that great player, being at the top of the league, being able to just come in day in and day out knowing that I'm the best player on the floor.

Raptors head coach Nick Nurse thinks Barnes has the makings of a special player, especially if he continues to grind.

“He reminds me of two guys we already have - OG (Anunoby) and Pascal (Siakam),” Nurse said. “And if he can adopt the work ethic that they've done to become as good as they've become, then he'll have a chance to do similar things, I think.”

The coach envisions a lineup that includes all three athletes on the floor at once, instantly making the team tougher to play against.

“We like guys that can handle, pass, score, defend, rebound a little bit and just kind of come at you in waves with that,” he said. “And I think that gives us a chance to do that with the three guys.”

Still, there are sure to be growing pains as Barnes adjusts to the league, Nurse cautioned.

Some were surprised when NBA commissioner Adam Silver announced from the stage of the Barclay Center in Brooklyn, N.Y., that Barnes was the Raptors' selection with the fourth-overall pick.

There were a lot of good players on the board at the time, Nurse said.

“There was a lot of work, discussion, thoughts about which player would be the best for us,” he said. “And we just felt the combination of the size, length, two-way player, possible potential down the road fit all those things. I think he just kind of nosed out some guys.”

While Barnes has never been to Canada, he said he did visit the Raptors Toronto-themed experience room in Tampa Bay, Fla., on his workout day.

“It just showed me different things about the city. It's a really nice city. It's beautiful,” he said, noting that his dad is Jamaican and they had lots of family in Canada. “I really like the city, I really want to go see it for myself in person.”

Barnes marks Toronto's highest selection since 2006 when the Raptors chose Andrea Bargnani with the No. 1 pick.

The Raptors also hold the 46th and 47th picks in this year's draft.