Injured Jozy Altidore absent from training in Atlanta, said to be back home 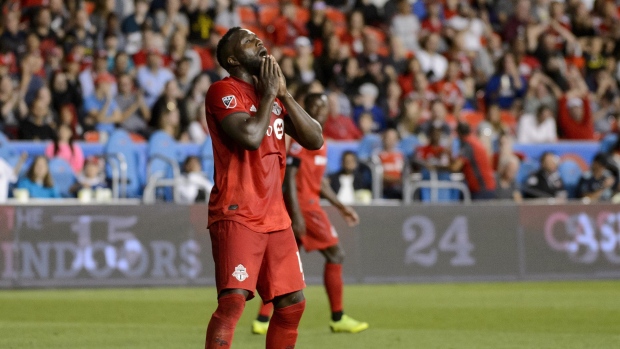 Toronto FC forward Jozy Altidore (17) reacts after missing the net during second half MLS Soccer action against the Montreal Impact, in Toronto, on Saturday, Aug. 24, 2019. Toronto FC trains in Atlanta with a question-mark continuing to hang over injured striker Jozy Altidore as the fourth seed in the East prepares for Wednesday's Eastern Conference final showdown against the defending MLS champions. THE CANADIAN PRESS/Andrew Lahodynskyj

ATLANTA - It looks like Toronto FC will be without injured striker Jozy Altidore again for Wednesday's MLS Eastern Conference final in Atlanta.

The U.S. international was not at training at a local club facility in Atlanta on Tuesday morning. A source said Altidore did not make the trip.

That was backed up by an Instagram photo of Altidore and fiancee/tennis star Sloane Stephens, posted with a Toronto placeline after the team left by charter for Atlanta on Monday afternoon.

Altidore missed the two previous playoff games -- against D.C. United and New York City FC -- due to a quad strain suffered in the regular-season finale Oct. 6.

Toronto has moved Spanish playmaker Alejandro Pozuelo up front in his absence.

This report by The Canadian Press was first published Oct. 29, 2019.