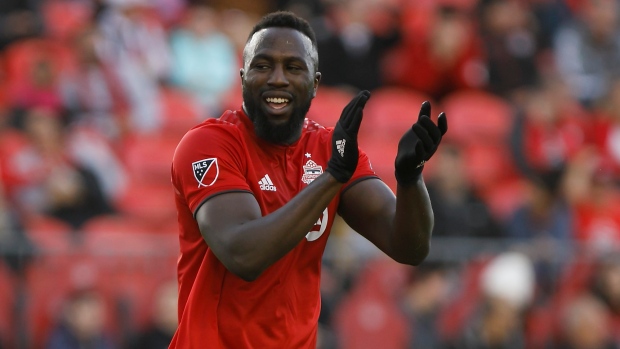 Toronto FC forward Jozy Altidore (17) reacts after a shot on goal during second half of MLS soccer action against the Columbus Crew SC, in Toronto, Sunday, Oct. 6, 2019. Toronto FC will have an early start to the MLS playoffs, with its first-round match against visiting D.C. United kicking off at noon local time on Oct. 19. THE CANADIAN PRESS/ Cole Burston

Altidore left Toronto's 1-0 win over Columbus Crew SC in the 70th minute Sunday. Toronto coach Greg Vanney said after the match that his star forward had a sore quad.

U.S. Soccer did not detail Altidore's injury. A Toronto FC spokesman said the MLS club would have an update Wednesday.

Altidore was limited to 13 regular-season MLS matches in 2018 and 22 this year because of injuries. He ranked second to Alejandro Pozuelo in Toronto scoring with 11 goals this season.