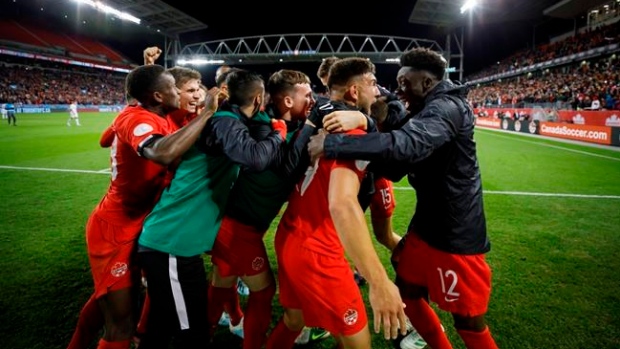 Canada midfielder Alphonso Davies (12) looks at forward Lucas Cavallini (19) as they celebrate Cavallini's goal during the second half of CONCACAF Nations League soccer action against the United States, in Toronto, Tuesday, Oct. 15, 2019. THE CANADIAN PRESS/Cole Burston

TORONTO - In the days leading up to Canada's CONCACAF Nations League game with the U.S., Canadian coach John Herdman said his players didn't need him for motivation.

A 34-year-winless run against the Americans plus the need for valuable FIFA rankings points to earn a more direct route in World Cup qualifying would do the job just fine, he reasoned.

So did the 44-year-old Herdman, renowned for his ability to inspire, hold back?

“I think every minute of the day he has a motivational speech,” said a smiling Lucas Cavallini, who scored the insurance stoppage-time goal in Canada's 2-0 win Tuesday at BMO Field.

“Every since John took over, he's been focused on changing the identity of Canadian soccer,” added defender Kamal Miller. “And step by step, every camp, we've just been getting better and better. We feel like we're reaching new heights.”

Said teenage forward Jonathan David: “This guy knows what he's doing ... because he has a tactic every game.”

While there is far more work to be done by the 75th-ranked Canadian men, it can be argued that Herdman has changed the face of soccer in Canada since being named women's coach eight years ago.

“He brought new football to Canada ... Thank you for bringing the spirit, the belief, the energy to these guys,” veteran goalkeeper Milan Borjan said as he sat next to Herdman in the post-match news conference.

Herdman inherited a women's team that was in a dark place after finishing last under Italy's Carolina Morace at a disastrous 2011 World Cup in Germany. Herdman helped rebuild the women's talent pipeline, reminding the women why they played soccer and for whom they did it and led them to back-to-back Olympic bronze medals and fourth place in the FIFA rankings.

In January 2018, he switched its focus to the Canadian men - another team struggling for a road map out of the depths of CONCACAF.

Subsequent news that Canada would co-host the 2026 World Cup with Mexico and the U.S. gave fans something to look forward to, given the Canadian men have only ever attended one World Cup (in 1986).

Herdman wears many hats - coach, confessor, motivator among them. He surrounds himself with talent, counting goalkeeping coach Simon Eaddy and fitness coach Cesar Meylan among his inner circle from his days as women's coach. While he made changes to the existing men's staff, he also kept on some veteran team officials.

And he made a point of listing off a string of Canada Soccer employees after Tuesday's game, making sure they got their recognition for the famous win.

As coach, he has a knack of saying the right thing at the right time.

Take Liam Fraser as an example. The 21-year-old came on in the ninth minute, replacing the injured Mark-Anthony Kaye, and delivered a calm, composed performance in his senior debut.

After the game, Herdman shared a conversation he had with the Toronto FC midfielder.

“Only last camp I'm sitting on the stairs with him and the kid's upset that he can't see an opportunity coming for his country. And here you are,” he said with a smile.

“Funnily enough on the stairs three weeks ago I said 'Son, just keep being good and the universe will bring you something. Just keep being good.' And it did. He got on that field tonight and he did bloody well.”

Herdman watches over teenage star Alphonso Davies, trying to shield him from the expectations that come with a big-money transfer to Bayern Munich while putting him in a place to succeed.

“With Phonzie, it's just 'Get out there and play, son. Just go and do your thing,”' said Herdman.

The night before the U.S. game, he sat down with Davies and showed him clips from his days with the Vancouver Whitecaps.

“We just went back to some of his original days where when he got kicked, he got straight back up,” said Herdman. “And when balls went in behind him, he'd recover and he'd fight to get it back. I think a little bit of that was missing. Just that wanting to play free and thinking he had to be in a structure. But he was free tonight and it was lovely to see.”

“He can't sit on his heels,” he said of Davies. “We had Cavallini and (Junior) Hoilett on the bench.”

Cavallini plies his trade for Puebla in Mexico while Hoilett is a veteran of the English Premier League who now plays in the Championship with Cardiff City. In past years, they would be automatic starters.

Hard work and commitment have been constants for Herdman, who grew up in Consett, just outside Newcastle, the son and grandson of steelworkers.

He played semi-pro football in the Northern League and for his university, soon realizing a pro career was not in the cards. So he got into coaching, starting to take courses at 16. He had his own soccer school at 23.

After spending time in South America to study Brazilian coaching methods, he returned home and set up a Brazilian soccer school. Players from Sunderland started sending their kids there, which led to a job offer in the Sunderland academy.

He spent three years there, working with a young Jordan Henderson, now a Liverpool and England star.

Herdman was lecturing four days a week in the sports science department at Northumbria University and working at the academy in the evening. He considered a PhD, using his experience at Sunderland as research.

Then Dr. Paul Potrac, his university supervisor, moved to Otago University in New Zealand. Potrac told Herdman about a soccer job as a regional director in New Zealand, selling him on the chance to essentially take over a blank football canvas.

Herdman took him up on it, coaching all ages while creating a soccer blueprint for the region. His hours matched his passion.

“I can't remember when I haven't done an 80-plus-hour week,” he once said. “It's my personality, probably my mental disorder ... when I'm tuned into something I'm passionate about, I'm a bit crazy about it.”

Then Canada came calling, dangling the lure of hosting the 2015 Women's World Cup.

Herdman is a driven coach. But a story about a VW Beetle speaks volumes about what makes him tick.

He used to drive a vintage silver Bug back and forth every weekend from university in Leeds to Consett to see his childhood sweetheart, now wife Clare. It helped that his best man was good at fixing Beetles.

Then someone crashed into the back of it, totalling the car. Herdman told his wife that some day, when he had time, he would get one to work on with his son.

Herdman mulled over the choice. While he liked the idea of working on the car with son J.J., he knew it might take years given his hectic schedule. So he bought the restored one, reasoning he and his son could share vintage car shows together (he also has a young daughter named Lilly-May).

The story demonstrates both Herdman's persistence and pragmatism.

Herdman celebrated Tuesday's win, which featured Canada's first goals against the U.S. in 12 years. His voice slightly hoarse and he proved to be in fine hugging form.

But he reminded listeners there is a long way to go.

“It's only one step, it's only one little drop in the ocean I'm hoping for this team. There's more to come,” he said.