'It's unacceptable': Maple Leafs look in the mirror after ugly effort 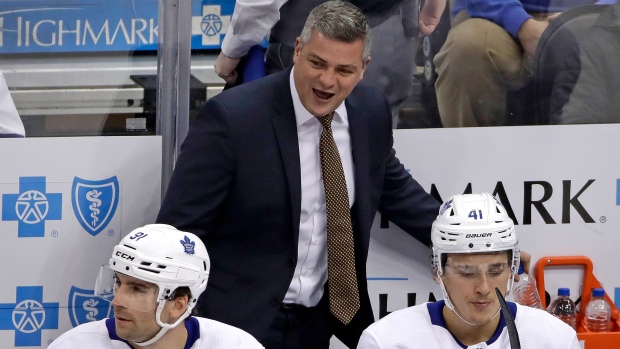 The star winger and his talent-loaded Toronto Maple Leafs teammates possess the ability - speed, hands, vision - to take down any opponent in the NHL.

It's the other things - effort, urgency, desire - that have too often been lacking.

“We owe it to ourselves and to each other in this room.”

And if that doesn't change, a Toronto team that started the year with Stanley Cup aspirations could soon find itself contemplating what could have been during an agonizingly long summer.

The Leafs followed a sub-par effort in Sunday's 5-2 road loss to the Buffalo Sabres with a shocking performance Tuesday in Pittsburgh.

Sidney Crosby and the Penguins toyed with Toronto for the first 35 minutes, building a 5-0 lead before coasting to a 5-2 victory in the first game of a home-and-home set.

The Leafs had the built-in excuse of fatigue for the Buffalo showing after beating the Ottawa Senators 4-2 in the nation's capital 24 hours earlier, but there was nowhere to hide in the Steel City.

Players didn't hold back in their post-game comments. Neither did head coach Sheldon Keefe, whose anger and disgust was palpable. Special teams were the latest culprit - joining slow starts and late collapses - after Pittsburgh scored three times with the man advantage and Toronto's power play did nothing to create momentum early.

Everyone had calmed down by the time the Leafs reconvened for a spirited practice Wednesday, a session with plenty of one-on-one battle drills, but the sour taste of embarrassment lingered.

“As other teams have elevated, we obviously haven't,” Leafs centre Auston Matthews said. “We need to elevate our play as a team.”

Toronto sat third in the Atlantic Division with 70 points from 61 games heading into Wednesday's action, but could wake up Thursday out of the playoff picture if the Florida Panthers defeat the Anaheim Ducks.

Florida, with 68 points from 59 games before that matchup on the West Coast, also has 26 regulation victories - the first tiebreaker in the standings - compared to Toronto's 23.

Toronto gets another crack at Pittsburgh at home Thursday, and things don't get any easier with the Carolina Hurricanes, Tampa Bay Lightning and Panthers on deck.

“We get down in these games early, and then we just give up and leave our goalie (hung out) to dry,” Marner said. “We need to make sure we get our compete level up. We need to be way better.

Keefe said he expects to learn something about his team Thursday, and pointed to the response his group had in early December after getting thumped.

Toronto was blown out 6-1 in Philadelphia by the Flyers, but starting goalie Frederik Andersen demanded the crease the following night at Scotiabank Arena against the rested Colorado Avalanche.

The Leafs lost that one 3-1, but Keefe called it “one of the most competitive games I've seen from our group.”

“That really showed me a lot about our team, and what we're capable of,” he said. “We just need to make the decision that the time is now and that it's important.

“We need to rise to the occasion.”

Andersen couldn't be faulted for any of the goals against in Pittsburgh, save for one where he turned the puck over behind his own net, and will get the call again Thursday.

“These lessons are not very pleasant, but they're important,” he said. “No one's really happy about what happened (Tuesday), but I think we've got to be excited (with) the way we can respond.”

Andersen is 0-3-0 since returning from a neck injury that sidelined him four games, posting an ugly .835 save percentage and a 4.42 goals-against average. Jack Campbell, who was acquired in a trade with the Los Angeles Kings earlier this month, is 3-0-1 in four starts for Toronto with a .919 save percentage and a 2.40 GAA.

“He's our guy,” Keefe said of Andersen. “He's coming back off of an injury. We need to get him back going. This team's been at its best when Fred's been at his best.”

Toronto owns the league's 24th-best save percentage in 2019-20 at .897. Overall, Andersen sits at .906 compared to the combined .918 he put up during his three previous seasons with the Leafs.

“When I'm at my best I didn't really worry about what's going on (with) things I can't control,” Andersen said. “That's something I've been working on lately ... just trying to make sure I put in 100 per cent effort and focus on what I do and what my job is.

“Over the last little bit, it's been what's missing.”

Much like the work ethic in front of him.