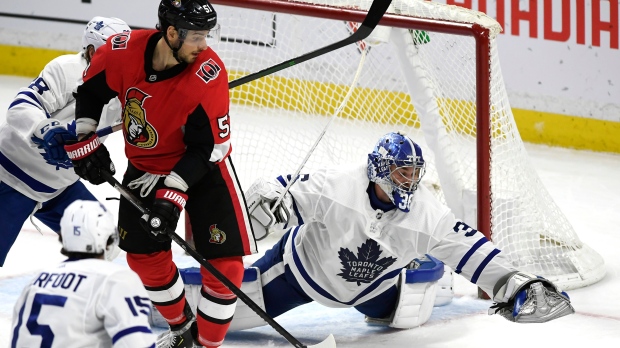 OTTAWA - Jack Campbell stopped 24 shots for the Toronto Maple Leafs in a 4-2 win over the Ottawa Senators on Saturday night.

Campbell is now 3-0-1 since the Leafs acquired him Feb. 5

Auston Matthews, Jake Muzzin, William Nylander and Mitch Marner scored for the Leafs (31-20-8), who are trying to stay ahead of the Florida Panthers in the Atlantic Division.

Florida lost to Edmonton 4-1 earlier in the day.

Marcus Hogberg got the start, but was pulled after giving up three goals on 16 shots. Craig Anderson stopped all 14 shots he faced.

While Toronto games have always brought a number of Leafs fans to Canadian Tire Centre, on this night it was hard to find a Senators jersey through entire sections of the building. The 18,544 on hand was the biggest crowd of the season.

Trailing 3-1 the Senators made it a one-goal game midway through the third as Goloubef scored his first of the season. It was the 30-year-old's first goal since Nov. 17, 2015.

Zach Hyman had a great opportunity to regain the two-goal lead as he took advantage of a Senators giveaway and broke in alone, while shorthanded, but Anderson made a great glove save to keep Ottawa within reach.

Marner sealed the win with an empty-net goal with just over one minute remaiing in regulation. He flipped the puck into the net from deep within his own zone, launching it over the Senators defence.

The second period saw the Leafs jump out to a 3-1 lead and Hogberg being pulled.

Toronto doubled its lead as Muzzin sent a wrist shot past a screened Hogberg, who had no chance at the puck.

Ten minutes later Nylander tipped a John Tavares shot past Hogberg to make it 3-0 and end the Ottawa goalie's night.

The Senators got on the board at the 16-minute mark as Chris Tierney made a nice pass out front to Vladislav Namestnikov who fed Brown for the open net for his 11th of the season. With his 36th point Brown, a former member of the Leafs, tied his career high.

Toronto came out of the first with a 1-0 lead as Matthews was able to squeeze a shot through Hogberg, on a goal the rookie goaltender would surely want back.

Notes: With Mark Borowiecki sidelined with an ankle injury Thomas Chabot was given the “A”. Mikkel Boedker was the lone healthy scratch for the Senators. Toronto cancelled practice on Friday because of a flu bug making its way through the team.