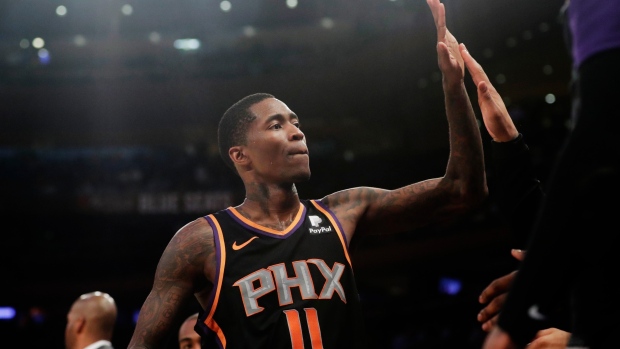 In this Dec. 17, 2018, file photo, Phoenix Suns' Jamal Crawford celebrates with teammates during the second half of an NBA basketball game against the New York Knicks in New York. Crawford is back in the NBA, filling one of the spots that the Brooklyn Nets needed to address after their roster was decimated coming into the season restart at Walt Disney World. With Vince Carter now officially retired, Crawford comes back into the league as its oldest player -- about 2-1/2 months older than Miami’s Udonis Haslem. (AP Photo/Frank Franklin II, File)

People may have forgotten. After all, it was more than 450 days ago. And for a while, it looked like that game might have been Crawford's last as a player -- because for most of this season, the now 40-year-old guard remained unsigned.

"To be honest with you, I went through a range of emotions," Crawford said. "I was frustrated at the beginning. I didn't understand. I didn't know what happened."

Luckily for Crawford, it doesn't matter anymore. He's back in the NBA, filling one of the spots that the Brooklyn Nets needed to address after their roster was decimated by injuries and coronavirus-related issues coming into the season restart at Walt Disney World. With Vince Carter now officially retired, Crawford comes back into the league as its oldest player -- about 2 1/2 months older than Miami's Udonis Haslem.

Crawford, a three-time NBA Sixth Man of the Year and a past winner of the Twyman-Stokes Teammate of the Year Award, practiced with the Nets for the first time on Wednesday.

The Nets will become Crawford's ninth team in a career that, once he gets into a game at Walt Disney World, will reach 20 seasons.

His last game was April 9, 2019, when he came off the bench and scored 51 points for Phoenix against Dallas. He's the oldest player in NBA history to score 50 in a game -- Michael Jordan was about seven weeks shy of his 39th birthday when he had his last 50-point outing -- and for a while this season it looked like Crawford would join Kobe Bryant in a rare NBA club.

Bryant scored 60 in his final NBA game. If Crawford's last outing with Phoenix would have been his NBA farewell as well, he and Bryant would have been the only two players to score at least 50 in their on-court finales.

"If guys said your last game was a 51-point game off the bench, that's a heck of a exit," Crawford said. "So, I tried to find the peace within that and I got a chance to spend time with family. But I'm so happy to be back."