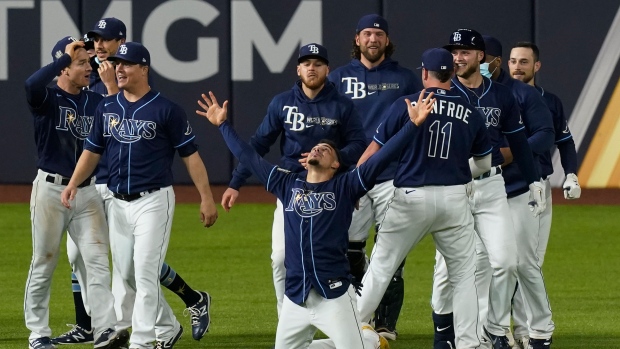 ARLINGTON, Texas - Kenley Jansen threw a cutter inside to Brett Phillips for a ball, then a cutter and a sinker for called strikes.

One strike to go, and the Los Angeles Dodgers would be one win from the World Series title that has eluded them since 1988.

The 33-year-old right-hander had faltered this year, lost velocity, but bounced back. He assured Dodgers fans, and so did manager Dave Roberts.

Kevin Kiermaier was on second after a one-out single and Randy Arozarena on first following a two-out walk.

Just one more strike to a hitter who figured to be overmatched.

After all, Phillips hadn't even been on Tampa Bay's AL Championship Series roster, had not gotten a hit since Sept. 25. He wasn't even with the Rays until an Aug. 27 trade from Kansas City.

Jansen threw a cutter to the left-handed batter, over the middle and knee high.

And the night came undone for Jansen and the Dodgers.

Phillips flared the ball into centre field at 83 mph for a single and it bounced twice. Just before it was to land a third time, Chris Taylor tried to scoop it in his glove. The ball got away as Kiermaier scored easily to tie Game 4.

“I just thought at least it's a flare,” Roberts said. “And I'm thinking through the 10th inning, and so then it just kind of spun out right there. So I wasn't really just prepared for a walk-off in that situation.”

But every mistake was compounded.

Taylor finally retrieved the ball and threw to first baseman Max Muncy, who relayed home with plenty of time to get a stumbling Arozarena.

Dodgers catcher Will Smith, a step in front of the plate and slightly up the first-base line, tried to catch the ball and make a swipe tag in one motion - only Arozarena was not there. He had fallen down and done a 360, popped back up, taken two steps toward home, then stopped and taken two steps back toward third.

The ball went off Smith's mitt and skipped by. Meanwhile, Jansen failed to back up the plate. He backpedaled off the mound and was on the infield between home and third as the play unfolded.

Arozarena started home again and flopped onto the plate, patting it eight times with his right hand as Jansen finally realized he was in the wrong place.

“Will trying to turn around and put a quick tag on him, doesn't squeeze the ball and then trickles it away,” third baseman Justin Turner said. “And that was ballgame.”

In the Dodgers dugout, Roberts threw up his hand, a pained look on his face, jumped back from the dugout's top step, slammed his blue notebook to the ground, took off his cap and banged it against the dugout rail.

Game lost for Jansen. Opportunity lost for the Dodgers.

“It's tough and you've got to digest it. But we have to turn the page,” Roberts said. “We're going to come in fresh tomorrow. So I think we're very resilient.”

It was just the third Series game that ended with a walk-off hit when a team trailed by two outs in the final inning, after Kirk Gibson's two-run homer for the Dodgers off Oakland's Dennis Eckersley in the 1988 opener and Cookie Lavagetto's two-run double for the Dodgers against the Yankees in Game 4 in 1947.

It was only the fifth Series game that ended in a walk-off that included an error, the first since Game 3 in 2013.

Shell-shocked looks. Uncertainty ahead going into Game 5, when Clayton Kershaw starts against Tyler Glasnow in a rematch of the opener.