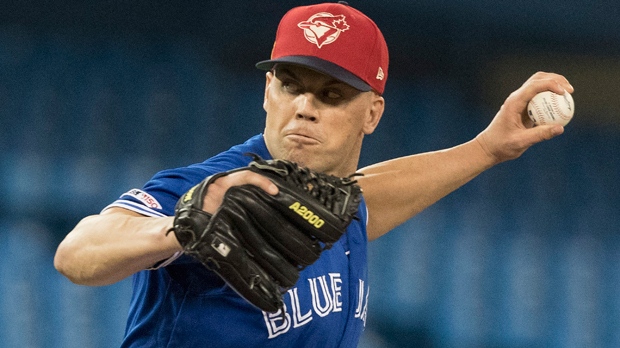 Cashner (9-3) won for the fifth time in his last six decisions. The veteran right-hander pitched a comfortable seven innings, giving up only three hits in his economic 88-pitch effort, 61 for strikes.

Guerrero reached base on a single up the middle to break-up Cashner's brief flirtations with a no-hitter, and made his way to second on a Cashner wild pitch.

It was the second straight game the Blue Jays offence, which scored 49 runs in the first seven games of this 10-game homestand, were kept at bay before 22,405 fans at Rogers Centre.

The Orioles (27-61) arrived in Toronto with the worst record in the majors and the only team that has failed to win at least 30 games in 2019. But they have outscored the Blue Jays 12-2 in the first two of a three-game series.

Blue Jays left-hander Clayton Richard (1-5), who won his first game for Toronto on Canada Day, pitched well through six innings, but errors from first baseman Justin Smoak and Guerrero in the fourth inning hurt Richard's cause.

Richard allowed seven hits, and six runs but only three were earned.

The Orioles sent nine batters to the plate in the fourth. Nunez's homer, his 20th of the season, followed an error on Smoak that put Trey Mancini on base.

A double from Pedro Severino, Guerrero's error, and a single to centre field from Anthony Santander cashed in another Orioles run. Keon Broxton knocked in his team's fourth run with a double to right field and Santander scored on Richie Martin's groundout to short.

Richard surrendered another run in the sixth inning on an RBI single from Steve Wilkerson. Wilkerson also homered in the ninth inning.

Blue Jays left fielder Lourdes Gurriel Jr. returned to the lineup after a day off to rest a wrist injury. But he went 0 for 3 with a ninth-inning walk.

Notes: Blue Jays ace Marcus Stroman will not pitch in the MLB all-star game in Cleveland on Tuesday. Blue Jays manager Charlie Montoyo phoned American League manager Alex Cora on Saturday to inform him that Stroman continues to be hindered by a left pectoral cramp he suffered a week ago â€¦ Stroman (5-9) hasn't pitched since his day ended after two pitches in the fifth inning against the Kansas City Royals on June 29. He began to experience tightness in his non-throwing shoulder while warming up for the inning â€¦ He was named to his first all-star game last Sunday.