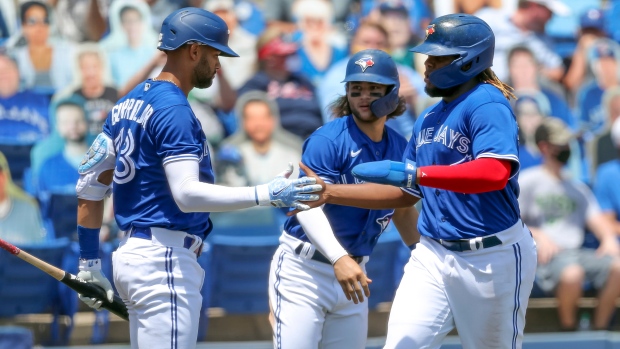 Toronto Blue Jays' Lourdes Gurriel Jr., left, congratulates Bo Bichette and Vladimir Guerrero Jr. after they scored on a double by Marcus Semien against the Atlanta Braves during the third inning of a baseball game Sunday, May 2, 2021, in Dunedin, Fla. (AP Photo/Mike Carlson)

About one quarter of the Toronto Blue Jays' season is complete and Canada's only big-league team finds itself right in the mix in the American League East.

Considering the team's injury woes, an unexpected variety of starting pitchers and ever-shifting home field plans, the Blue Jays' contender status is quite an accomplishment.

“With everything that we've gone through, all the injuries, playing on the road it seems like every day, these guys have done a great job picking up each other,” manager Charlie Montoyo said Tuesday on a pre-game call with media. “Every time we lose somebody, somebody else picks (them) up.”

Toronto (22-17) entered Tuesday's game against the visiting Red Sox just 1 1/2 games behind first-place Boston in the East division standings. With victories in 15 of their last 22 games, the Blue Jays opened the three-game series five games over the .500 mark for the first time this season.

Over the first seven weeks of the campaign, Toronto's pitching staff has done well to survive the many challenges thrown its way. The Blue Jays' batting order has been fearsome at times and Montoyo has done well to manage all the moving parts.

And some intriguing reinforcements could be coming.

Star outfielder George Springer (quad) continues to make progress, and his return would provide even more pop in the heart of the order. Another player to watch is stud pitching prospect Alek Manoah, who's dominating at triple-A and could get a shot in the major leagues.

In the bullpen, off-season signing Kirby Yates (elbow) was pencilled in for the closer role before surgery ruled him out for the year.

Montoyo has used a closer-by-committee approach with several high-leverage options battling injuries at times this season. Rafael Dolis, who was reinstated from the 10-day IL on Tuesday, should provide some stability in the late innings.

Despite that, Toronto's bullpen earned-run average (3.15) ranks third in the American League entering play Tuesday. The Blue Jays will need more innings from the rotation to avoid reliever burnout.

Although they have been forced to use bullpen days on occasion, Toronto opened the Red Sox series ranked last in the AL in innings pitched (176 2/3) from its starters.

Toronto has had a tough schedule so far but has persevered. The Blue Jays have yet to lose a series against a divisional opponent and have won or split seven of their last eight series overall.

The long ball is a big reason why. The Blue Jays entered play Tuesday tied for the American League lead with 56 homers.

The ball carries nicely at Toronto's temporary home of TD Ballpark in Dunedin, Fla., just like it does at the team's next temporary home, Sahlen Field in Buffalo, N.Y. The Blue Jays will kick off play at the usual home of their triple-A affiliate on June 1.

“They have proven to be resilient. We've been fortunate to have some depth and we've had a lot of different contributions. We just want to continue to build upon it and continue to improve.”

The team hopes to play at Toronto's Rogers Centre later this season. Plans remain up in the air due to border restrictions as a result of the COVID-19 pandemic.

This report by The Canadian Press was first published May 18, 2021.